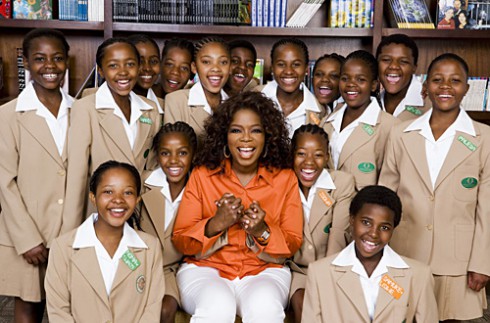 The bond Oprah has with the students and graduates from her South African Leadership Academy took her by surprise — particularly because she never had maternal instincts.

“Gayle was the kind of kid who, in seventh grade Home Ec class, was writing down her name and the names of her children,” Oprah told The Hollywood Reporter of her best friend, Gayle King. “While she was having those kind of daydreams, I was having daydreams about how I could be Martin Luther King.”

Even when Oprah was pregnant, she had no desire to be a mother.

“”I thought, ‘Before the baby was born, I’m going to have to kill myself,'” she recalled to Piers Morgan in 2011 of getting pregnant at 14. ” I don’t even know what I thought the plan was going to be… You’re having a baby out of wedlock, your life is over. So when the baby died – the baby was never brought home from the hospital – when the baby died, I knew that it was my second chance.”

Now approaching her 60th birthday, Oprah’s childbearing years have passed. And she couldn’t be more at peace.

“If I had kids, my kids would hate me,” she told THR. “They would have ended up on the equivalent of the Oprah show talking about me; because something [in my life] would have had to suffer and it would’ve probably been them.”

Melissa McCarthy and Ben Falcone have the cutest relationship! Find out how they met