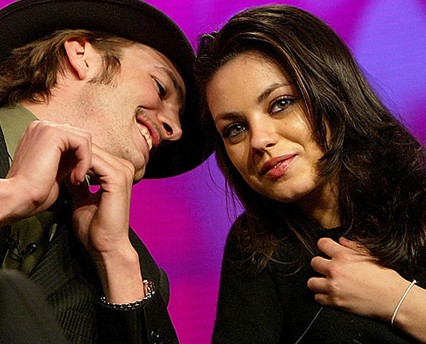 Although former That 70s Show co-stars Mila Kunis and Ashton Kutcher won’t confirm that they’re dating, the evidence is mounting that they’re a couple.

They’ve been linked together for months, but initially denied reports that they’re more than friends. Even so, things have seemed to be heating up lately. They were spotted last week making out at a wrap party for the Steve Jobs biopic. And now there are photographs of them at an airport going on a trip to Bali Sunday.

Onlookers at the airport noticed that they weren’t hiding their affection for each other.

“They were hugging and appeared affectionate as they stood in a security line. They also did a spot of shopping before boarding their plane.”

Ashton, who is separated from, but not divorced from, wife Demi Moore, has known Mila for 14 years, and she was his first kiss.

They fact that they have known each other for so long, and essentially grew up together is a good sign. They might have had feelings for each other for a long time, but Mila had a long-term relationship with Macaulay Culkin. (I’m guessing that relationship was what got her addicted to video games.)

Speaking of Macauly, a new Enquirer report this week claims the former child actor has been spiraling out of control on drugs since his break-up with Kunis in early 2011. He was photographed this year looking extremely thin and sick, so this report could just be people getting a paycheck based on speculation about that, but let’s face it: it could be true. This is a too-familiar story-line in Hollywood. If Macaulay is addicted, hopefully he’ll get the help he needs.

UPDATE: Culkin’s rep issued this statement to TMZ: “categorically without merit” as well as “impossibly and ridiculously fictitious.” The rep continues: “We beseech the responsible media to consider the source and its reputation and to please not perpetuate this destructive and insulting story by pursuing it any further.”