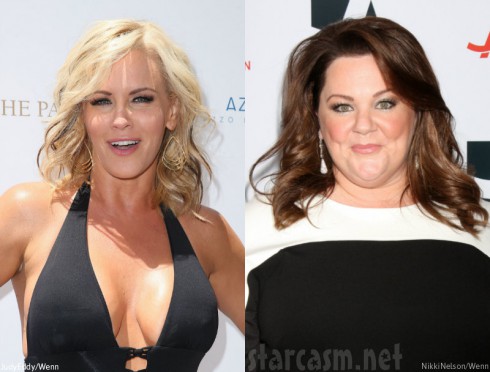 Did you know Melissa McCarthy and Jenny McCarthy are cousins? The funny ladies, who both hail from Illinois, apparently used to be very close until their careers complicated matters.

According to a May 2013 Star report, the tension stretches back to the 1990s when Jenny refused to help Melissa get acting jobs.

“Jenny told her she wouldn’t make it because of her weight,” a family source said.

When Melissa went on to an Academy Award-nominated role in Bridesmaids and an Emmy-winning role in Mike & Molly, Jenny reportedly asked for a boost with her floundering career. Still smarting from Jenny’s weight jab, Melissa supposedly declined to give her cuz a role in one of her movies.

At the time of the report, a representative for Melissa told Gossip Cop it was “not true.” However, Melissa recently seemed to confirm the family feud by telling Howard Stern she won’t attend Jenny’s upcoming wedding to Donnie Wahlberg because the ladies live in “opposite worlds.”

Melissa McCarthy couldn’t get designers to make an Oscars dress