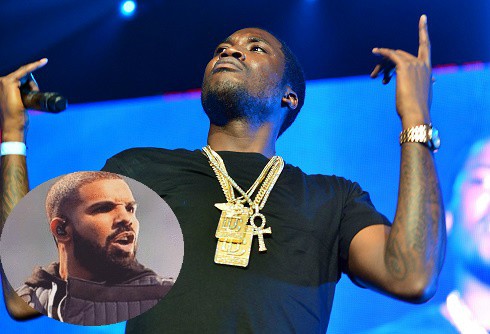 It’s been a Twitter feud apocalypse this week after Nicki Minaj’s MTV VMA snub! Joining Katy Perry and Taylor Swift in the fracas, albeit on a different tangent, is Nicki’s boyfriend Meek Mill, who called out Drake for not writing his own music!

The drama began when Meek, seemingly angry about Nicki’s industry diss, posted the accusation on July 21 stating that Drake didn’t tweet about Meek’s new album because he was caught not writing his own rhymes.

Stop comparing drake to me too…. He don't write his own raps! That's why he ain't tweet my album because we found out! ?

As the public responded to these accusations, Meek posted a series of tweets standing by his statement, even accusing Drake of using material he had not written on Meek’s latest album, Dreams Worth More Than Money.

The whole game know forreal they scared to tell the truth! I can't wait tok these guys and sit back and act like they don't know!

He ain't even write that verse on my album and if I woulda knew I woulda took it off my album….. I don't trick my fans! Lol

Drake has remained silent on his own social media accounts. However, a conversation posted to Twitter by his pal Hitman Holla shows he may just be taking the high road by responding praying hands emojis and simply stating, “I signed up for greatness. This comes with it.”

Lol this my guy! pic.twitter.com/WUAtFsWCbr

Even other celebs got in on the feud, including Bruno Mars and Ed Sheeran, who staged their own Twitter feud peppered with colorful language that compared the VMAs to professional wrestling.

@BrunoMars any way we do dis you gon' come up short

The only person who might not find the drama so entertaining is Meek’s girlfriend. Despite her own Twitter feud, it’s well known that Nicki and Drake have been friends for some time, had a rumored romance, and have even performed together. It looks like Nicki took her outspoken nature behind the scenes over Meek’s tweets, as he later offered up a public apology in a video posted by TMZ.

As the two performed onstage together during a set on Nicki’s The Pinkprint Tour, Meek issued a “special apology shout out” for his online behavior, explaining that he was “just upset as a fan.”

VIDEO Nicki Minaj and a fan grope each other on stage