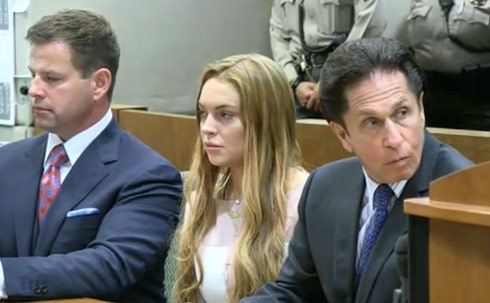 Lindsay TefLohan hit one of her fav Los Angeles hot spots today as she made her way to a scheduled court hearing in regards to allegations that she lied following an accident involving her Porsche on the Pacific Coast Highway.

• Lindsay arrived late, and on what’s become her version of the red carpet stroll, a ton of paparazzi took pics and screamed at her. In addition, someone randomly tossed glitter in her direction (known as a glitterbomb I’m told). 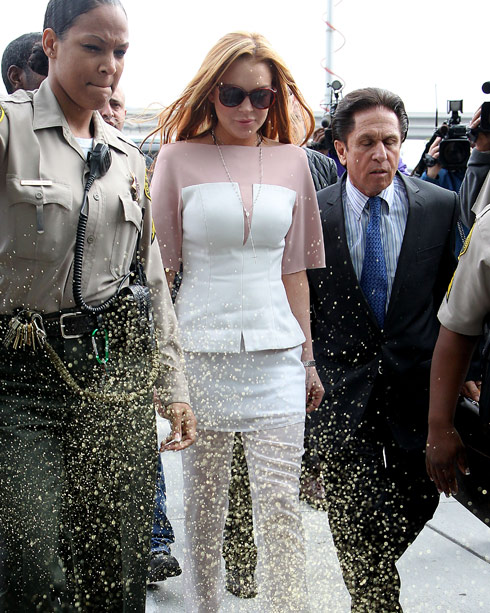 • Lindsay Lohan made a last hour plea deal after previously having decided not to do so.

• She has agreed to plead no contest to the crimes of reckless driving and lying to cops and will thus spend 90 days in lock down rehab.  In addition to rehab, Lindsay will perform 30 days of community labor and undergo psychotherapy for 18 months — she’ll get credit for time already completed in therapy.

• She also admitted to a probation violation in regards to that whole jewelry heist situation. She was sentenced to 180 days in jail for that, but the sentence was stayed – translated – no jail time for this either as long as she avoids additional trouble.

Lindsay Lohan Will Keep Partying, Even If It Kills Her

Will Lindsay Lohan confess everything to Oprah?