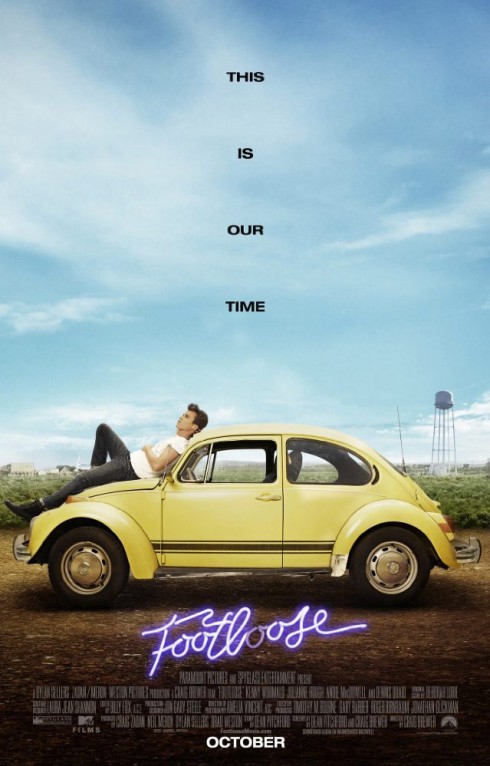 Forty-year-old women across America are rejoicing , while simultaneously their male counterparts are cringing. Wednesday Paramount Pictures released the trailer for their remake of the iconic ‘80s movie Footloose. (Trailer below)

Twenty-seven years after the original film hit theaters, Paramount hopes to capitalize on a combination of nostalgia and the current craze of dance-focused entertainment.

Due for release in October, the movie stars relative unknown Kenny Wormald as Ren McCormack, the character first made famous by Kevin Bacon. Wormald’s short list of credits includes Clerks II (“dancer”) and The Drew Carey Show (“dancer #10”). Clearly he was born to be Ren 2.0.

Paramount had initially cast dreamy Zack Efron in the role of Ren, but Efron pulled out of the project in early 2009.

Ren’s romantic interest, Ariel Moore, is played by Dancing With the Stars alum, Julianne Hough, which I supposed makes total sense for a dancing movie, though she may be a little too pretty and graceful for the character. Lori Singer’s gangly, rough-around-the edges Ariel has some pretty big red boots to fill.

I really didn’t want to watch this trailer at all, and I was sure I was going to hate it. Footloose is something I hold sacred, like Swayze’s hair and original formula Coke. But director Craig Brewer seems to have paid respectful homage to the original. Ren 2.0 drives the same beat-up yellow VW Bug. He wears an almost identical outfit on his first day of school (hail to the skinny tie!). And thank you sweet Baby Jesus, the Olympic-style gymnast routine in the warehouse lives on!

I really didn’t like the idea of this project, but I’ve been listening to my Footloose soundtrack all day, and now me and Bonnie Tyler both are holing out for a hero. Don’t let us down, Kenny!