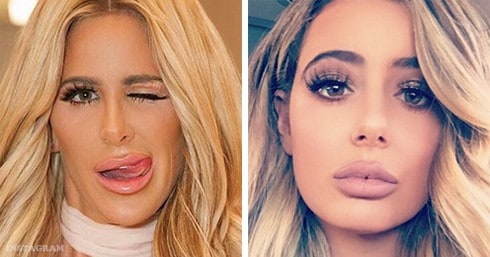 Watch out internet trolls, Kim Zolciak is in full #MamaBearMode!

Don’t Be Tardy star Kim Zolciak-Biermann went off last night via Snapchat on folks criticizing her teenage daughter Brielle over her lip injections.

Brielle took over Bravo’s Instagram feed and in the process caught all kinds of negative feedback, especially about her lips. Kim caught wind of all the hate and fired off with a f-bomb diatribe:

“Oh hell no, you f***ers on Bravo TV under Brielle’s pictures writing comments. You’re f***ing with the wrong one, honey—the wrong one. So you guys want to know how I’ve manifested this amazing life, and have an amazing husband, six healthy, beautiful children? It’s because of who the f*** I am and how I treat people. And when I say it’s because of who I am, it’s because of who I am, my character, who I am as a person. I do what I say I’m going to do. I’m a woman of my f***ing word. I’m honest. I don’t have these blessings because I sit behind a computer screen and write nasty f***ng comments about a 19-year-old.”

Kim fully supports Brielle’s choice to get lip injections. She told Andy Cohen on WWHL, “First of all, she’s almost 20, so talk to her. And then, why not? Shoot it up. I’ve heard her complain about her lips since she came out of the womb, honestly.”

Brielle recently clapped back at all the haters with a little middle fingers up salute of her own. You can read up about that and see a before and after lip-pic here.

Kim went on to challenge folks to post images of their own daughters so she could critique them. “I would love for all you f***ers to post your daughters on your page so I can tell you exactly what the f*** I think about her. OK, you low-life pieces of s***? Get off Bravo TV and stop talking s*** about my daughter and get a f***ing life. Do you not see that you are the reason why this world is so f***ed up? You’re grown-a** adults… If my daughter wasn’t strong can you imagine what the f*** you would do to her with your comments?,” she said.