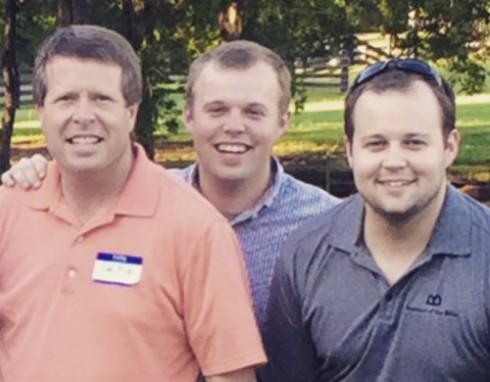 For the first time since the 2006 investigation into molestation accusations against him was revealed exactly one month ago, Josh Duggar spoke out in a video message on Sunday — but only to thank dad Jim Bob Duggar for all he’s done.

“We are so grateful for you,” Josh said in the video, where he is seen standing next to his very pregnant wife, Anna Duggar. After listing some memories he has of his father, Josh added, “I can also just think of all the moments you’ve been there for us, through the hard times and through the good times. I just know that your investment in each one of our lives is priceless.”

The video ended with Anna thanking Jim Bob for “raising such an awesome husband.” Josh and Anna then shared a kiss before looking back at the camera. Considering some followers encouraged Anna to divorce Josh after his history came to light, this seemed to be a statement that they aren’t going to do that.

Josh and Anna also took to Instagram — which they revisited a couple weeks ago to wish son Michael a happy birthday — with more Father’s Day praise. Interestingly, Anna just thanked Josh, but not her own father.

This weekend, Jill Dillard and Jessa Seewald also ventured to Ohio with their spouses to speak at the ALIVE Christian music festival. (Josh and Anna were originally slated to speak, but didn’t show.) During their talk, Jill, Jessa and their husbands didn’t mention the scandal — at least, not directly.

“We’re not a perfect family, we mess up,” Jill said, People reports. “Imagine what life is like with a family with two or three kids and multiply that about 10 times over and that’s what you get.”

The couples also spoke about the big changes in their personal lives, with expectant mother Jessa saying they still hope to adopt in the future and new dad Derick Dillard reflecting on the busy past year.

“A year ago we weren’t even married and within a matter of a year – came back to America, got a new job, got engaged, got married, found we’re expecting, had a baby,” said Derick, who celebrated his first anniversary with Jill on Sunday. “The change in the year to come from the last year, I don’t know if we can out-do it, but we’ll try.”