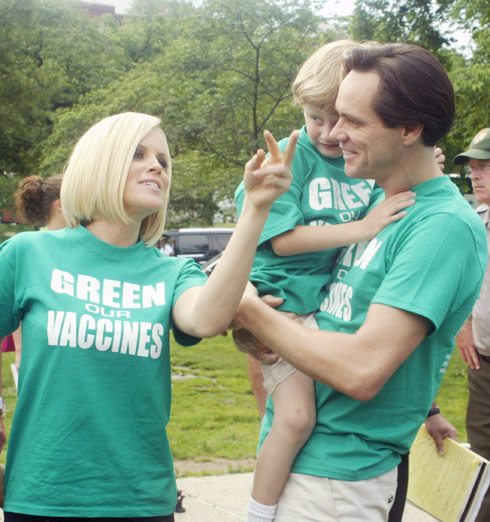 Jenny McCarthy has been making the publicity rounds as the new host of NBC’s adventure dating reality show Love in the Wild. On Monday she visited Howard Stern at his original job as a shock jock and revealed some sad details about the current status of her relationship with ex Jim Carrey.

Jenny has a 10-year-old son, Evan, who suffers from autism. The outspoken self-described autism activist revealed to Stern that Evan often tells her that he misses Carrey but that the actor has been unwilling to visit him since their break up in 2010:

“I’ve tried to ask Jim numerous times to see Evan, because my son still asks. I haven’t reached out directly . . . I think that sometimes people need to take a real break from each other. But I still love him. I think you can love people from a distance and respect him. But as a mother, you just hope when you have a relationship with someone, it has nothing to do with the child when you break up.”

Jim has spoken publicly about a life long battle with depression. McCarthy added:

“I tell Evan that someday you’ll cross paths, meet again. . . but it’s hard. He’s been in therapy. It’s a process, he’s working on it.”

During the interview Jenny also confirmed that she is dating Chicago Bears future Hall of Fame LB, Brian Urlacher.

Thanks to our friends at VH1 Celebrity for the scoop.