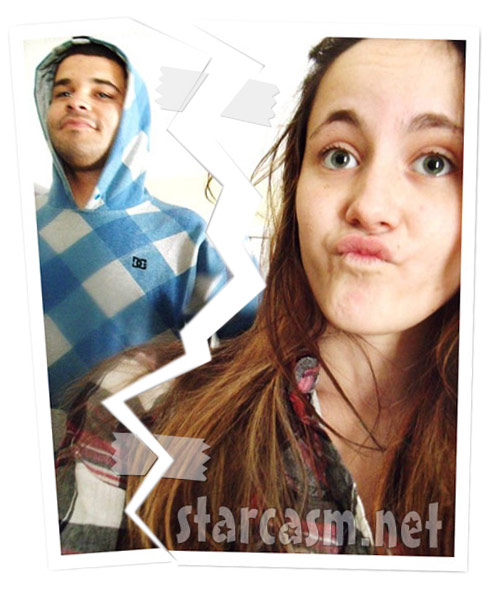 It seems like Teen Mom Jenelle Evans just can’t leave well enough alone. The soap opera like reality of her back and forth relationships between ex Kieffer Delp and current fiance Gary Head can make your head spin. Jenelle is once again having a public spat with Delp via Twitter and her comments, one in particular, are especially harsh.

It started with a comment from former manager James Duffy who tweeted, “Keiffer gets stopped got more autographs and pics than Jenelle Evans did. Weird but true…” A few folks went back and forth inserting various opinions on that and Jenelle just couldn’t help but replying, “not f***in true I get naked pics sold of me but I kept kieffers deepest darkest secrets.”

Someone replied to this claim that Jenelle keeps secrets with, “You told everyone he got raped and pimped out by his dad o_O.” Here was Jenelle’s rebuttal:

After being reminded that she had sex with him Kieffer tweeted, “dude stop talking Sh!t b!tch I said nothing to u let ne be.” He also added, “but yu just had sex with me raw for almost a month straight what’s that say bout yu ?” Jenelle’s fiance Gary did chime in:

Seems like a pretty reasonable thing for Gary to add. Speaking of reason I have to admit that even Kieffer appeared to try and take the high road when he tweeted, “look ok I’m happy for yu I haven’t and won’t talk no Sh!t get mad at who said it not me just live yur life. I am.” But that statement came after he wrote, “and I got more naked pics on deck that I just turned down 40000 dollars for them so keep f***ing with meI will.”When asked when he took the pics Delp responded harshly, “I took them wile she was on her f**k kieffer break from Gary lmao.”

Anywho, where it got particularly nasty is when Jenelle dropped the following vicious tweet:

Oooof. If you frequent Starcasm you know we have rarely if ever been on Delp’s side but even for Kieffer that’s a pretty harsh statement. And of course he replied:

Someone asked Delp about what happened during the wreck, “otw to nc o tottaled my car flipped three times and fell into a 15 ft ditch full of water – went to hospital I was next to unhurt.” And on it goes as I’m posting…

It’s a shame to see Jenelle still acknowledging and confronting Kieffer Delp mere days after getting engaged to Gary who seems to be taking this latest spat in stride. It’s obvious Jenelle just needs to drop ANY and ALL contact with Kieffer because inevitably something regretful happens. This also fuels the fire of all her naysayers who have doubted the sincerity of her engagement.

Other than a little censoring all twitter quotes are as written