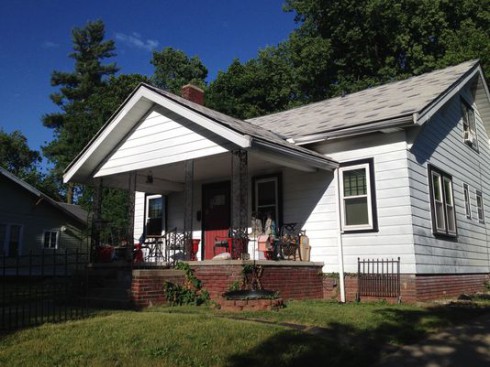 An Indiana coroner determined the body 88-year-old veteran Gerald Francis Gavan Jr. had been decomposing in his living room for nine months before he was discovered on May 3. Most shocking of all, wife Ila Solomon carried on as if nothing was the matter.

After the Tippecanoe County Coroner released her findings on Tuesday, a neighbor of told Lafayette Journal-Courier he never suspected anything.

“It’s really disturbing… The fact that we’ve been living here the whole time and talking to her,” said Tyler Imel, who moved in next door in August 2013 — half a month after Gavan’s estimated death. He said he even spent time on the front porch while chatting with Solomon and was oblivious to the body decomposing on the other side of the door.

Imel’s roommate added Solomon’s disposition definitely didn’t tip them off. Joe Childs said, “If I lived with a dead body in my house, I couldn’t compose myself the way that she did every day.”

Meanwhile, Solomon — who only married Gavan two years ago — refutes the coroner’s report. She said her husband only died five days before his body was found. She explained the rapid decomposition was due to dehumidifiers, rodents and flies. She declined to explain why she didn’t report his death for the five day window in her version of the story.

Another neighbor who was personally acquainted with Gavan previously said he served in World War II and earned a Purple Heart for his actions during D-Day. He lived in the same house since 1955. Ila began working for him as a live-in caretaker before eventually marrying.

The coroner is still working to determine Gavan’s cause of death.