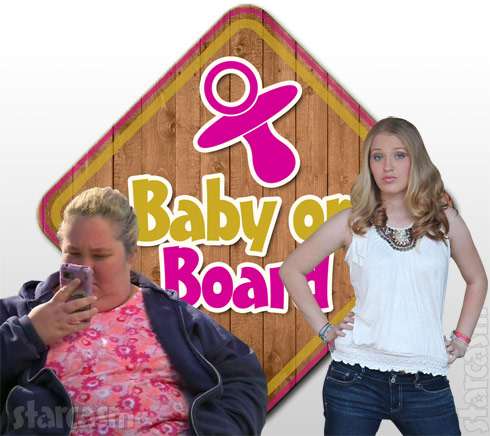 Here Comes Honey Boo Boo‘s Mama June (who just last night came out as bisexual on Inside Edition) is going to be Grandmama June again! Her oldest daughter Anna “Chickadee” Cardwell reportedly revealed the news that she is six weeks pregnant to TMZ late last night — prior to telling her mom.

June was calling the shots after Anna’s first baby, Kaitlyn, was born, but this time June will be allowed to visit when Anna’s around, but that’s it.

Anna says she doesn’t trust her mom’s judgment anymore, because when she was younger, June would leave her with various people for long periods of time. One of them was child molester Mark McDaniel.

The site adds that as far as men go, Anna will only trust her husband, Michael Cardwell, and her Uncle Poodle.

It appears as though Anna did tell her mom eventually via text message, and Mama June took to Instagram to respond:

Well guess who will b a gigi and aunts again in December we will @annamarie35 texted me late last night and told me she was 6 wks as of thursday as qe they r too young to have another one i will support her and Michael but katilyn will always b gigis first baby im not going to sugar coat its im nervous for them as i know they r struggling with just them and katilyn right now and adding another one is going b hard and they r in different state for me to help her out like i was able to help alot with katilyn but going to try to b supportive as possible ….congrats @annamarie35 @cardwellmichael #gigisbaby#2

Anna herself hasn’t responded on social media yet. She had previously talked about a potential spin-off reality show, so perhaps fans will be seeing her pregnancy and birth on the small screen soon? Stay tuned!

UPDATE – Anna posted this message on Facebook on Sunday:

Okay everyone I ain’t posted anything about my pregnancy but yes I’m pregnant I am six weeks but I never knew being pregnant will cause so much drama and I’m tired of it.