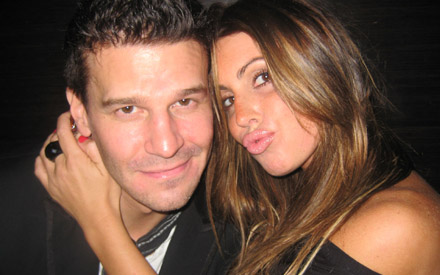 There is a new technology being developed that I think would be a wise choice for any married celebrity involved with Rachel Uchitel.  It is called a “Tiger Text“ and it allows senders of text messages to make their communications disappear in a pre-determined amount of time.  But alas for its namesake Tiger Woods and now Bones (yeah I know “bones”) star David Boreanaz it is too late.

Radar Online has obtained some rather eye opening text messages sent back and forth between Uchi(kiss and)tel and David (bones) Boreanaz.  Lets just forget the Tiger Text app, all married men stay away from Rachel Uchitel!  Here are some of the tasty texts in which Rachel identifies herself as Puma (“meow” or the “girl who sneak-ers around”):

Uchitel: “Just (bleeping) go and be with her.”

Uchitel: “Oh, please!! … You’re such a liar. You’re never leaving. You’ve wasted my time and I’m once again alone.” She adds: “I can’t (bleeping) be alone anymore. I’ve been alone my entire life.”

Boreanaz: “What the HELL are you talking about. We spend more than enough time together.”

Well (bleeping) H-E- double-hockey-stick you two infidelity love birds.  According to a report that was in Star way on back in October of 2009 (before the Tiger festivities began) the two would meet once a month or so and this was while David’s wife of nine years Jamie Bergman was pregnant with their second child!  The report, based on an inside source for Star, went as far to say:

The final straw for Rachel came when David was in the delivery room with Jaime for their daughter’s birth on Aug. 31. “He was on the phone with Rachel, giving updates,” says the insider. “That grossed her out, because she felt that should have been private.”

David and his wife are trying to work it out and stay together but with this latest “text reveal” that may prove to be increasingly difficult.  You can check out the full text message reveal via the above Radar Online link.

PHOTO Christina Aguilera out without lipstick