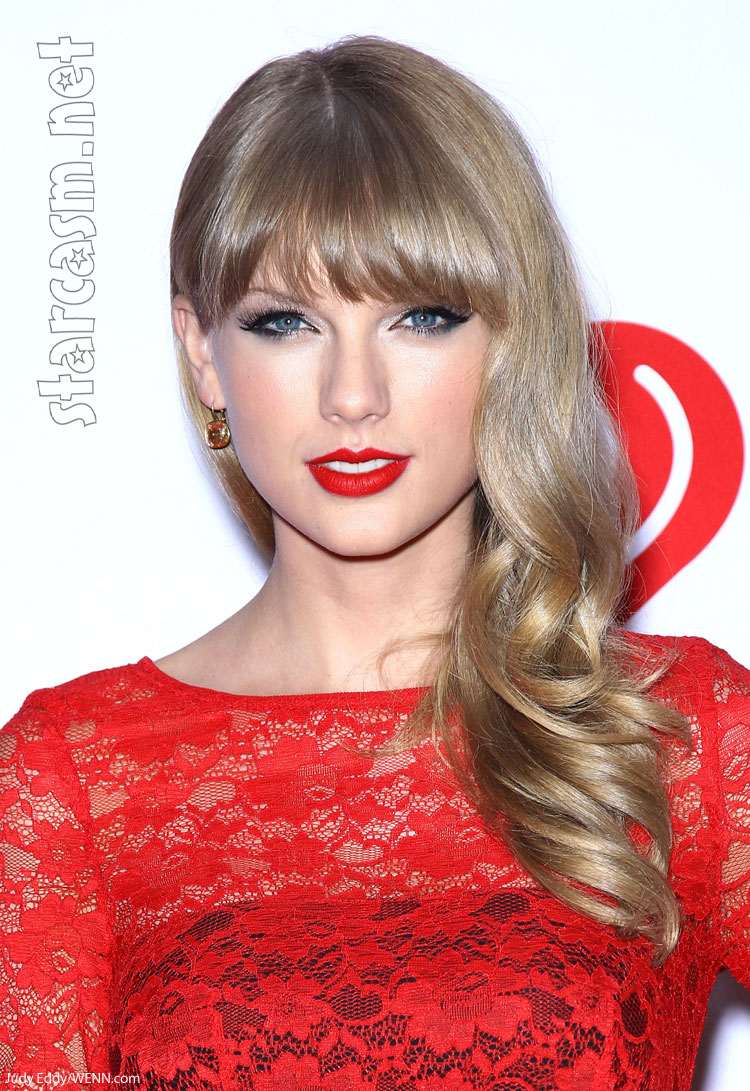 It’s Taylor Swift’s M.O. to write about the men she’s dated (mostly famous since the first album) and the people in her life in her confessional songs, even going as far as to leave clues to who they are about in the liner notes of her CDs (There’s a good ploy to keep getting people to buy traditional CDs Taylor!)

Her upcoming album Red (dropping October 22) is no exception. Below is a guide to all of Taylor Swift’s songs that are obviously about someone in particular.

—-
On VH1 Storytellers, Taylor explained why she called her new album and the title track Red:

“I recently wrote an album called Red and I am holding a guitar that is also red. The song that I wrote was about this relationship that I had that was the worst thing ever and the best thing ever at the same time. I was writing this song and I was thinking about correlating the colors to different feelings I was going through.

Emotions like daring, passion, love, affection, and the other side: jealousy and anger and frustration and ‘You didn’t call me back and I need space.’ What I ended up doing was writing a song that I hope you want to hear right now called ‘Red.'”

“I Knew You Were Trouble,” off of Red, is probably about John Mayer. On Good Morning America Taylor said the song is about “kind of being frustrated with yourself because you have your heart broken and you knew when you first saw that person you saw all those red flags and you just went for it anyway.”

Some have speculated that she lost her virginity to Mayer, but he viewed her as another notch on his belt of celebrity girls. And then there’s this line:

If this song is about Mayer, it’s not the first one about him she’s written. “Dear John” is definitely abou him, and Taylor has said that “Dear John” and “Story of Us” are about the same person.

“We Are Never Ever Getting Back Together,” also from Red. The most likely candidate for this one is Jake Gyllenhaal. They dated, and broke up, and got back together in 2010. And then they broke up.

The clues are really mounting up on this one. For one, at the iHeart Radio Music Festival Taylor said what many people think is “Jake, it’s your turn,” before she sang WANEGBT.

The music video features a guy who kind of looks like Jake, and the guy is seen wearing a puffy jacket like the one Jake wore in their infamous paparazzi photos together. Speaking of those photos, Taylor is also seen wearing a scarf in the video like the one she wore that day (which was Jake’s) and the photo was used as a gag in a VMA commercial. Kevin Hart’s face pasted on top of Jake’s while “WANEGBT” plays. Taylor also wears the $100,000 bracelet Jake gave her during the music video. There’s also a dude in an animal suit (Jake was in the movie Donnie Darko, which features a sinister bunny,) and reference in the song to guy preferring indie music “that’s much cooler than mine.” On a side note, Jake likes indie music.

Here’s a video of Taylor talking about that particular “cooler records” line:

This January Taylor was profiled for Vogue, where she says her next album will be about a very bad breakup that pretty much shattered her heart. She says that the Christmas of 2011 was good because she wasn’t sad and crying during it like she was Christmas 2010 (which was right after her break with Jake.) She says the breakup was “earth-shattering,” but not recent.

“There’s just been this earth-shattering, not recent, but absolute crash-and-burn heartbreak,” she says, “and that will turn out to be what the next album is about. The only way that I can feel better about myself—pull myself out of that awful pain of losing someone—is writing songs about it to get some sort of clarity.”

Yep, this song is almsot definitely for Jake, and there will no doubt be more songs for Jake on this album.

Taylor told Nightline that she found inspiration for the song when an ex-boyfriend was telling friends they were getting back together. Just so you know, they’re not.

“Tim McGraw” – This song from her first, self-titled album, is about one of Taylor’s high school exes, Brandon Borello. She dated him when he was a senior, and she was a freshman, and wrote the song because he was about to go off to college. Taylor told USA Today “Brandon bought the album, and said he really loved it, which was sweet. His current girlfriend isn’t too pleased with it.”

“Forever & Always” was added to her Fearless album at the last minute, which, coincided with a sudden breakup from Joe Jonas during a 27-second phone call. “Last Kiss” from Speak Now is also supposedly about Joe Jonas.

“Teardrops on My Guitar” from Taylor Swift is about a guy named Drew Harswick, who she had a silent crush on in high school. When Taylor’s first album came out and Drew heard the song, he asked for a chance with Taylor, and got turned down cold. According to Taylor “It was the perfect fairytale ending, but a little too late.”

“Stay Beautiful” is about another guy she never dated named Cory.

Speaking of Corys Taylor never dated, she supposedly wrote “Mine” about Cory Monteith after they shared a “moment.”

Here’s a story from the ‘nets:

“Cory and Taylor were sitting by a lake and he put his arm around her but that’s about far as it got because she was scared. But then she started thinking about what their relationship would be like if he was the one she stopped running away from love.”

“Hey, Stephen” was written from Stephen Liles from the band Love + Theft when they were on tour together.

“The Story of Us” is about the same person as “Dear John,” which means it’s about John Mayer. The secret message in the CD booklet is CMT AWARDS, which John attended in 2010. According to Lainey Gossip, John and Taylor were secretly dating then, and had arranged for a stealth meeting after the awards. Some believe that the sweet song “Our Story” is also about Taylor’s affair with Mayer, before it all fell apart.

“Back to December” is an apology song to Taylor Lautner, who she met while filming Valentine’s Day. The hidden message is “Tay,” and the story at the time was that he was more into her than she was into him.

She said in an interview “I’ve never apologized to someone in song before. The person I wrote this song for deserves this. This is about a person who was incredible to me, just perfect to me in a relationship, and I was really careless with him.

“Enchanted” is about Owl City’s Adam Young. She felt “enchanted” enough after she met him at a concert to write a song about it (and later use that song as inspiration for her perfume Wonderstruck,) but she never got back to Adam when he offered up his own heart-felt song in response.

“Should’ve Said No” is about a pre-fame ex named Sam who cheated on her.

“Better Than Revenge” is about Camilla Belle, who Joe Jonas dated after breaking up with her. In the song she sings “She’s not a saint, and she’s not what you think, she’s an actress.”

“Innocent” is for Kanye West, who she never dated but who broke her heart nonetheless when he interrupted her 2009 VMA acceptance speech. She’s never confirmed that it’s about him, but when she performed the song at the following VMA Awards, they flashed his image in the background.

All we’ve got to say is “Watch out Conor Kennedy!”

CLICK HERE to see a list of the lyrics Taylor wrote on her arm during her last tour.