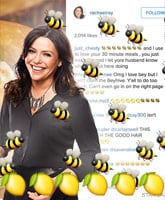 Beyoncé's avid fanbase, affectionately known collectively as the Beyhive, is all abuzz after the highly anticipated release of Lemonade last night. The "visual album" includes mention of a "Becky with the good hair," who is believed to be a reference to Jay Z's mistress and the cause of the infamous elevator fight in 2014. Some of the Beyhive's private investigator drones have identified Becky as fashion designer Rachel Roy, but a spelling mix up has some of B's bees swarming on Food Network chef Rachael Ray! Keep reading to see a huge selection of the hilarious comments left on Rachael's most recent Instagram photo of a pulled beef sandwich.
Read More...
We use cookies to ensure that we give you the best experience on our website. If you continue to use this site we will assume that you are happy with it.OkNoPrivacy policy