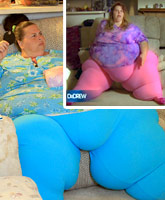 If you watched this week’s episode of TLC’s My 600-Lb Life and thought that 678-pound Pauline looked familiar, that could be for any number of reasons. The 50-year-old Sacramento, California mother of one is no stranger to national and even worldwide publicity after putting together a headline-grabbing resume that includes being named the Guinness Book of World Records “World’s Heaviest Living Woman” in 2011, appearing on Dr. Phil as well as HLN with Dr. Drew more than once, numerous tabloid stories about how she lost weight by having sex up to seven times a day with her ex-husband, and having her own section under the alias Paulee Bombshell on a plus-sized fetish website.