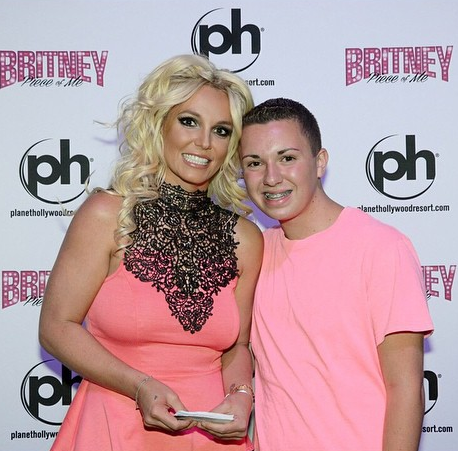 Despite a recent breakup and nasty cheating rumors, Britney Spears shows she still has nothing but love… for her fans.

David LeCours (pictured above with Spears) credits Britney for giving him the confidence he needed to be open with his family and friends that he is gay.

David claims Britney’s influence encouraged him and helped him navigate through life’s struggles. “You saved my life and helped me in my darkest days. Without you I wouldn’t be so open or proud of who I am,” David said of the Pop Princess.

Luckily for David, he was able to come face-to-face with the woman who saved his life. On August 21st, David met Britney at a meet-n-greet for her Vegas show “Piece of Me.”

During his time with the Pop Mega Star, David presented Spears with an emotional letter in which he poured his heart out. The letter explained the impact Britney has had on David’s life. “She helped me get through a real tough period in my life these past couple of months, and how I wanted to end it all but she made me be strong,” David expressed through his Instragram.

In response to David’s words of praise, Britney had a member of her team get David’s address. The super fan was surprised, when just days later, he received a letter in the mail from Britney! Not a tweet, not an email, not a Facebook post, an actual letter! On August 26th, David posted this photo of the letter which was post marked August 23rd, just days before Britney announced on Twitter she is single: 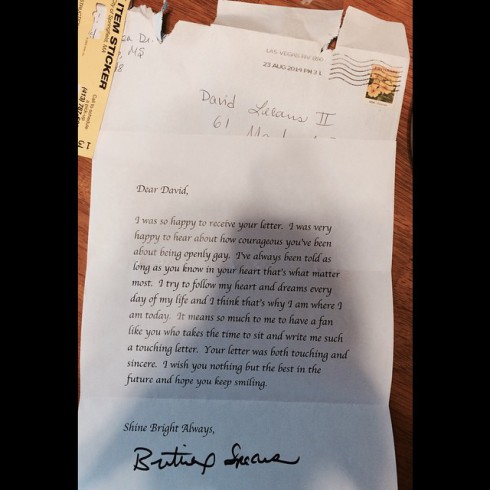 In it, Britney writes:

I was so happy to receive your letter. I was very happy to hear about how courageous you’ve been about being openly gay. I’ve always been told as long as you know in your heart that’s what matter most. I try to follow my heart and dreams every day of my life and I think that’s why I am where I am today. It means so much to me to have a fan like you who takes the time to sit and write me such a touching letter. Your letter was both touching and sincere. I wish you nothing but the best in the future and hope you keep smiling.

Kudos to Britney for showing major love and support to her fans!

Will Britney Spears lip-sync her Vegas shows? Does it matter?