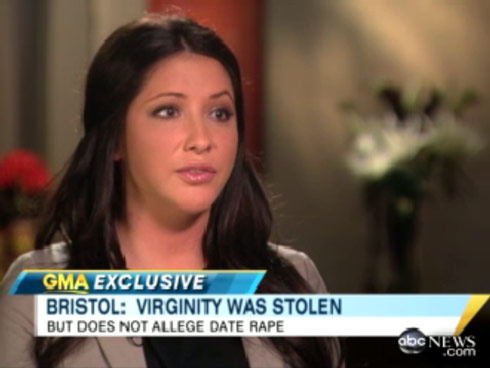 Bristol Palin has attempted to clarify some headline making comments that she wrote in her memoir about her baby-daddy Levi Johnston.

She sat down with Robin Roberts of Good Morning America yesterday and discussed the fact that in the book Not Afraid Of Life she used the term “stolen” when she described how she was drunk on wine coolers when she lost her virginity to Johnston. This is an extremely sensitive subject when you’re discussing the possibility of date rape but that word “stolen” would seem to indicate just that.

Here is a clip from that Q&A:

This is exactly what Bristol said about her book comments in regards to losing her virginity:

“Stolen is what it felt like. I’m not accusing Levi of date rape or rape at all but I am just looking back with my adult eyes that I have now, and just thinking ‘that was a foolish decision.’ I should have never been underage drinking, and I should have never gotten myself into a situation like that.”

Bristol is a well spoken and smart young woman and It’s my opinion she’s a great mother to her son Tripp. I think this is just an explanation lost in translation. I understand how she can “feel” like things were beyond her control because of the circumstances and decisions she made to put herself into that situation. She took responsibility for that in the interview and made it clear that she does not believe that Johnston raped her.

In the end she’s just trying to warn other girls that they might find themselves in a similar regrettable place if they take the same course of actions she did that night. She’s headstrong about trying to prevent teen pregnancy, in a previous post I discussed the substantial amount of money she made to be a spokesperson for The Candie’s Foundation.

I think Bristol has a bright future and that word “feel” when used with “stolen” changes the whole deal. As for Levi, well he does have one of the best book covers in history at least!