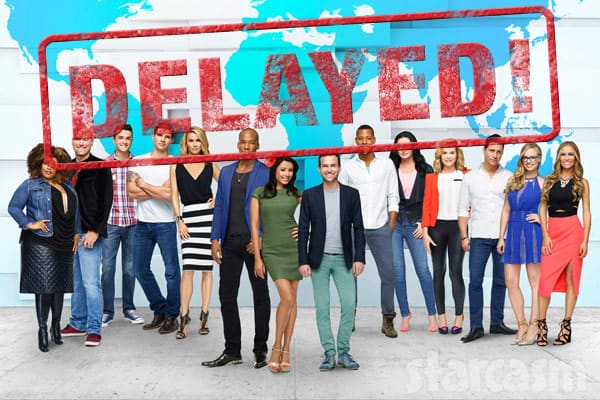 There is still some confusion among fans of Bravo’s new reality series Tour Group after the network pulled the show from its schedule last week after just two episodes. No, the show has not been canceled. In a rather peculiar move, Bravo has announced the show is on a hiatus and will return on May 10. So why the awkward pause? An inside source reveals that the network is revamping the show because fans weren’t buying one of the show’s central plot lines.

“Production feels that the love triangle between Jared [Levy] and the twins is artificial and boring,” the production source tells Real Mr. Housewife, of Jared’s relationship with twin sisters Jenna and Misty Kingma. “They want to relaunch the show with some real drama, specifically the feud of long-time BFF’s Heather [Marianna] and Amy [Grice], which will be the main storyline when the show returns. This reboot will give the show the boost that it needs.”

Oh snap! It’s pretty bad when Bravo puts your show on hiatus because your relationship is “artificial and boring!” (That said, I can think of any number of shows that might have qualified for a hiatus or two.)

Show star Heather Marianna, who will reportedly be at the heart of the newly revamped Tour Group, was of course supportive of the reported changes. “I am very excited for this!” Heather exclaims to RMH. “Trust me, this is a great move for the show,” she adds. “Bravo TV knows what they are doing… The first two episodes were a little boring… I’m excited for the real stories to be told.” 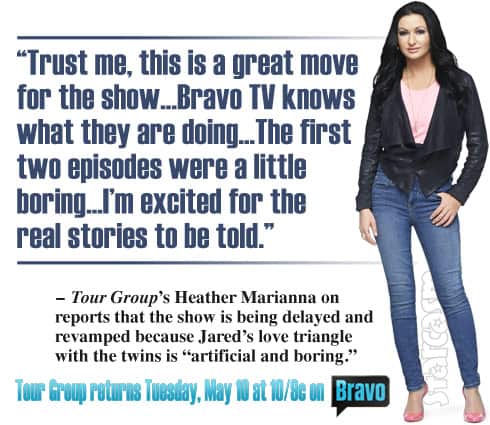 UPDATE – Heather responded to our story by indicating she didn’t make the “boring” remark:

@starcasm the show will be great when it returns I am enjoying the hiatus as far as boring that wasn’t a quote from me however ….

One person who doesn’t seem as enthused about the alleged changes, and who actually calls the accuracy of the reported changes into question, is twin Misty Kingma. “That quote about the storyline changing is complete fabrication,” Misty tweeted. She also responded to reports that she was none too pleased about her Bravonage à trois being downplayed: “Also never said I was upset the love triangle getting less time.”

When Tour Group does return, it will be a part of Bravo’s new “Travel Tuesday” with Below Deck Mediterranean. It’s still not completely clear if the show will kick off on on Tuesday, May 10 at 10/9c with the third episode, or if it will start over.