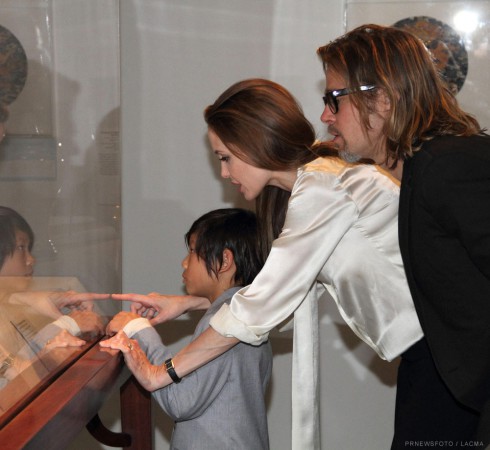 It seems the last three years of tabloid headlines were right after all! Brad Pitt and Angelina Jolie appear to be engaged and planning to officially get married some time in the near future.

The story turned from gossip to credible after Angelina Jolie was spotted Wednesday night wearing what appeared to be an engagement ring at a private viewing of the Los Angeles County Museum of Art’s Chinese Galleries (above).

Here is a zoomed in view of the ring: 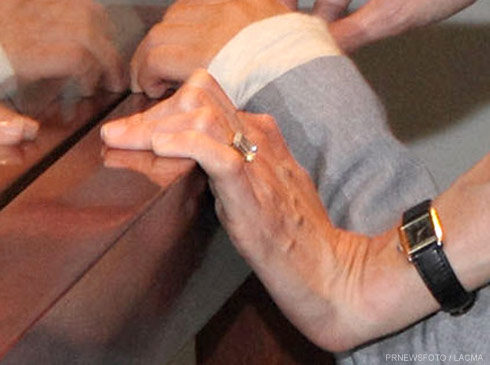 UPDATE – Brad Pitt’s rep Cynthia Pett-Dante has confirmed the engagement in a brief statement. “Yes, it’s confirmed. It is a promise for the future and their kids are very happy. There’s no date set at this time,” she says.

Although neither Jolie nor Pitt’s reps have confirmed the engagement, The Hollywood Reporter went through the journalism backdoor and found the designer of the ring, Robert Procop, who’s rep was more than willing to open up about the bling.

“I can confirm that, yes, Robert Procop did indeed design an engagement ring for Angelina Jolie, designed in collaboration with Brad Pitt.”

It doesn’t get any more clear than that! But the rep didn’t stop there. He went into more detail about what Brad wanted:

“Brad had a specific vision for this ring, which he realized over a yearlong collaboration. He wanted every aspect of it to be perfect, so I was able to locate a diamond of the finest quality and cut it to an exact custom size and shape to suite Angelina’s hand. Brad was always heavily involved, overseeing every aspect of the creative design evolution. The side diamonds are specially cut to encircle her finger. Each diamond is of the highest gem quality.”

The rep also talked with Us Weekly, giving even more details:

“Working closely with Brad Pitt to realize the star’s vision for the ring, Robert Procop was able to source a diamond of the finest quality which was then transformed using Pitt’s unique designs, cut with distinctive faceting to a shape and size that perfectly suits Angelina’s long, slender fingers. Throughout, Brad Pitt remained heavily involved, overseeing every aspect of the creative design process from the perfect cut of the diamond centerpiece – an elongated tablet shape – to the finishing touches such as the mounting of a galaxy of smaller stones which are graduated in size and faceted to match, adding a crowning lustre to the ring. The full creative journey – from conception to completion – took a year, with Brad Pitt waiting until the perfect moment to unveil this special jewel to Angelina Jolie.”

Procop designing Angelina’s engagement ring should come as no surprise as Jolie teamed up with the designer for her “The Style of Jolie” jewelry collection and she has worn his jewelry to many high-profile events. 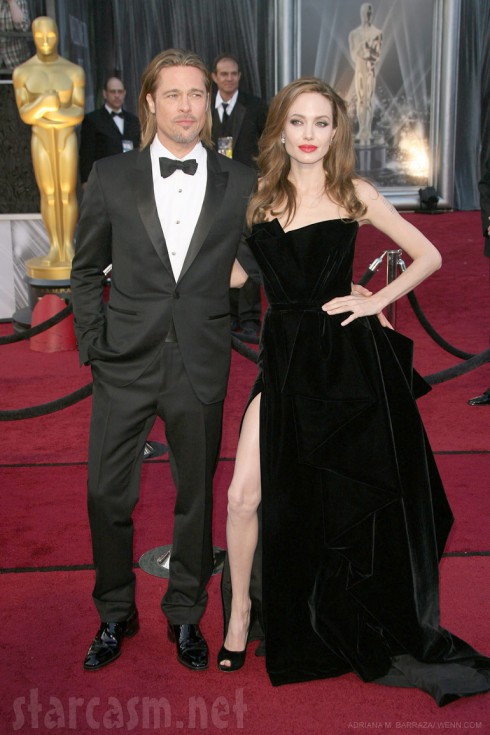 ^ Brad Pitt and Angelina Jolie at the 2012 Academy Awards

Of course there is no wedding date yet, or any other details about the betrothal outside of the bauble 411. If and when Pitt and Jolie get hitched, it will be the third marriage for Jolie, who wed Jonny Lee Miller (1996–1999) and Billy Bob Thornton (2000–2003), and the second for Pitt, who was married to Jennifer Aniston from 2000 to 2005.

The potential Brangelina marriage isn’t the only Brad and Angelina union news this week as Deadline reports Jolie may be in talks to star alongside her hubby in Ridley Scott’s film The Counselor. If that were to transpire, it would mark the first time the husband and wife duo would share the big screen since they fell in love while making Mr. and Mrs. Smith, released in 2005.