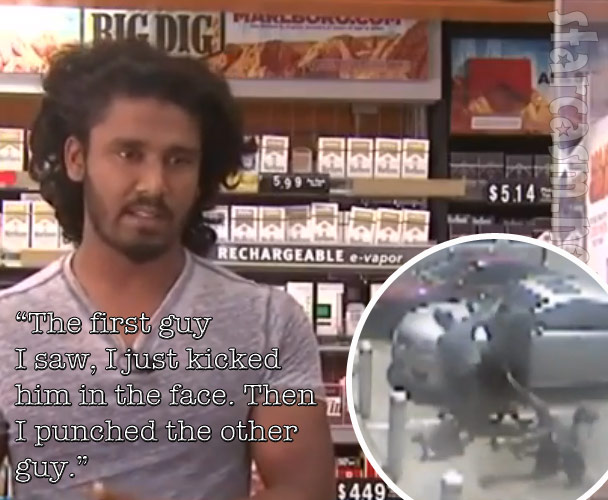 Mayura Dissanayake has a name that’s really hard to spell or pronounce… He also has fists and feet of fury that he used to thoroughly dismantle some would-be robbers outside of the gas station where he works.

Dissanayake is a clerk at a convenience store in Houston, Texas. Dude’s also a 5-time MMA champion in his native Sri Lanka (information that the criminals in the following video dang sure wish they would have known before hand).

Clerk stud was manning the counter when his coworker returned from a bank run back on July 10. Surveillance footage shows this other employee pulling into the station, getting out of his car and immediately getting attacked by a group of men who had emerged from an SUV.

Mr. Mayura rushed outside and proceeded to put an epic beat down on the crooks. “The first guy I saw, I just kicked him in the face. Then I punched the other guy,” he said.

The hooligans hauled out of there leaving 33-year-old Odell Mathis, who had been stomped by Dissanayake, behind. Concerned that Mathis might be armed, clerk stud went ahead and locked that guy up with a submission move until the cops arrived to save, err I mean, arrest him.