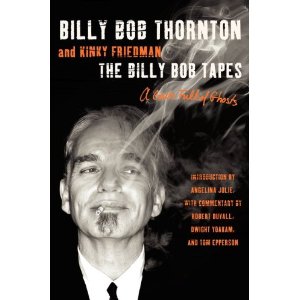 Angelina Jolie wrote the foreward to ex-husband Billy Bob Thornton’s memoir The Billy Bob Tapes: A Cave Full of Ghosts (guess he decided against a light, fluffy title,) publisher Harper Collins has confirmed to multiple news outlets. Maybe someday Angelina’s partner Brad Pitt can write a foreward to Jennifer Aniston’s bio. (We know a BUNCH of people would want to read THAT!)

Jolie, 36, and Thornton, 56, were married from 2000 to 2003 (Jolie filed for divorce July 2002), and famously wore vials of each other’s blood around their necks. Angie even got Billy Bob’s named tattooed on her arm! 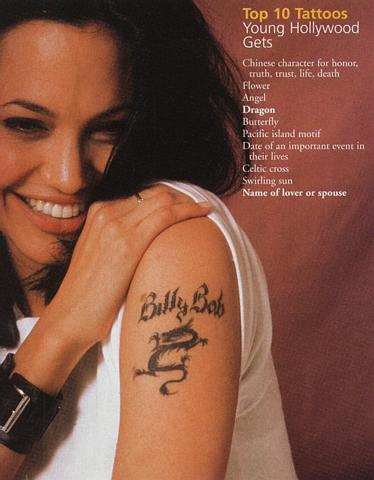 The tattoo has since been removed and replaced with the coordinates of the birthplaces of her six children (she also added Brad Pitt’s birth coordinates.)

Jolie adopted son Maddox at the end of her marriage to Billy Bob, and in this People story from 2002, he proudly showed off photos of his new son to a friend right before news broke of their impending divorce.

It was Angelina’s second divorce, and Billy Bob’s fifth! Neither has gotten married since, though they’re both in serious relationships (But Angelina has for all intents and purposes been married to Brad Pitt since 2005.) Angelina had previously been married to British actor Jonny Lee Miller, who she met on the set of Hackers (OMG! remember THAT movie? I actually recently watched it on Netflix streaming!)

Angelina later explained her divorce to Billy Bob, which happened three months after they adopted Maddox as very sudden and unexpected: “It took me by surprise, too, because overnight, we totally changed. I think one day we had just nothing in common. And it’s scary but… I think it can happen when you get involved and you don’t know yourself yet.”

She also told Barbara Walter that they had been drifting apart for a while. She had become deeply affected by Cambodia while filming Tomb Raider there, and Billy Bob was more focused on work:

Angelina recently had a highly publicized reunion with Billy Bob at a Berlin restaurant, and there were (unconfirmed) reports that the meeting brought Brad Pitt to tears. It sounds more like people speculated that Brad Pitt was in tears to help propel headlines, but you never know, maybe he was a little upset.

Billy Bob’s currently working on a new movie “And Then We Drove,” which is rumored to be inspired by his romance with Angelina, though BB denies it. Billy has said that he would never make a movie about an ex-lover, friend, or expose anyone else close to him, but he did admit to The Guardian that he will always love Angelina.

“Angelina is a wonderful woman. I’ll love her to the end of my life, and she will me. As friends.“

Here’s the book description from Amazon:

“There is—and could only ever be—one Billy Bob Thornton: actor, musician, Academy Award-winning screenwriter, and accidental Hollywood badass. In The Billy Bob Tapes, he leads us into his Cave Full of Ghosts, spinning colorful tales of his modest (to say the least) Southern upbringing, his bizarre phobias (komoda dragons?), his life, his loves (including his heartbreakingly brief marriage to fellow Oscar winner Angelina Jolie), and, of course, his movie career. Best of all, he’s feeding these truly incredible stories and righteous philosophical rants through his close friend, Kinky Friedman—legendary country music star, bestselling author, would-be politician, and all-around bon vivant. Put these two iconoclasts together and you get a star’s story that’s actually an insightful pop culture manifesto—a hybrid offspring of Born Standing Up with Sh*t My Dad Says.” 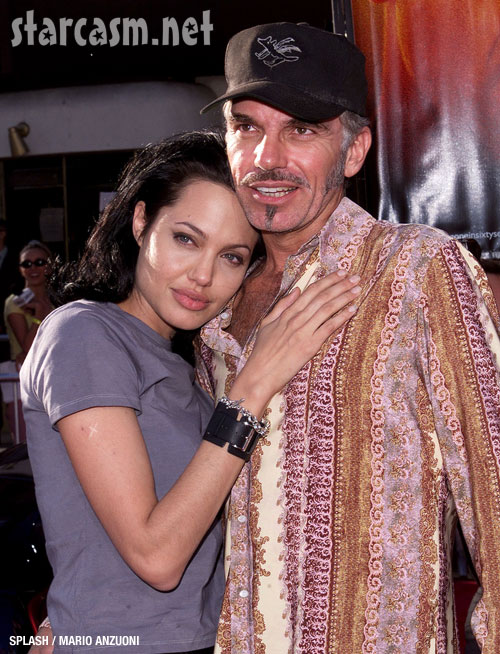 Would you be jealous if you were Brad?