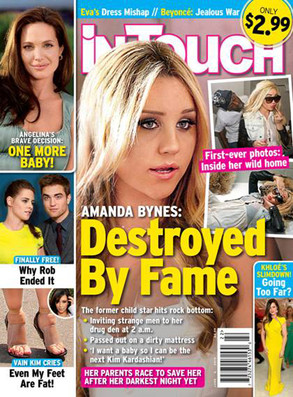 Amanda Bynes is featured in this week’s issue of In Touch Weekly during what they claim was a “drug-fueled house party” at her New York City apartment. In their shocking photos, a girl who appears to be Amanda is seen smoking weed with drugs strewn about her home. However, according to Amanda, the photos are fake and now, she’s planning to sue.

In a lengthy statement via Twitter, Amanda is claiming that the photos in the magazine are simply not her and that her face has simply put placed on someone else’s body and in someone else’s apartment. 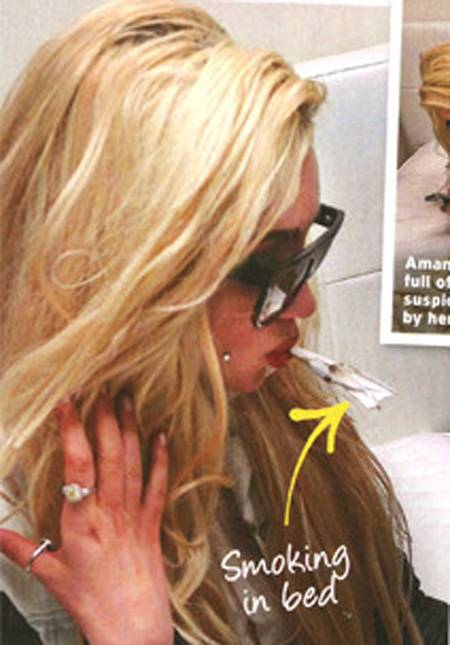 “That’s not my bed! Those aren’t my toes! My toes are pedicured!” she writes. “I just did an exclusive interview with intouch last week, now they bought fake altered photos by that ugly black man in the photo or someone who knows him! They used an old shot of me on the cover with a bad angle of my old nose before I had surgery to reshape my profile and to remove the webbing from my eyes.”

In the article, a man by the name of Giovanni Arnold claims that he was in attendance at one of Amanda’s parties and was shocked at her living situation. Although her apartment is quite large, he claims there is barely any furniture and all but three windows are spray-painted black. In addition to that, her house was extremely unkept and Amanda’s appearance wasn’t much better. 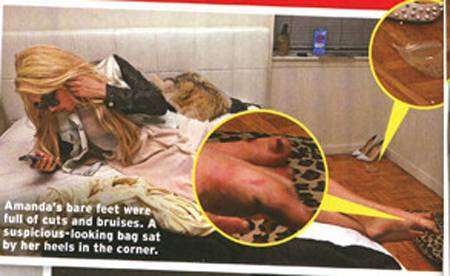 “I have to sue because that’s not my apartment, those aren’t my clothes!” Amanda continues. “They morphed photos of my face onto someone’s body to ruin my life! I have to make a big deal of this and sue because that’s not me! I care about my appearance so I have to defend myself! I look like a different person now that I had surgery! Why did they put an old shot of me on the cover? I don’t look like that anymore!”

Earlier this month, Amanda revealed that she had gone under the knife to correct the webbing under her eyes as well as her nose. Following the surgery, she requested that magazines only use up-to-date photos of her.

“I only want photos of my gorgeous new nose on the cover of tabloids and real magazines! The photos in this issue are fake and mocked up! I don’t care enough to keep talking about it. Just assume that I f**ked the boyfriend of the editor of intouch because they f**king hate me!”

In other Amanda news, she was recently turned away for a flight on a private jet after trying to use Google as identification. Click here for info on that unbelievable Bynes tale!