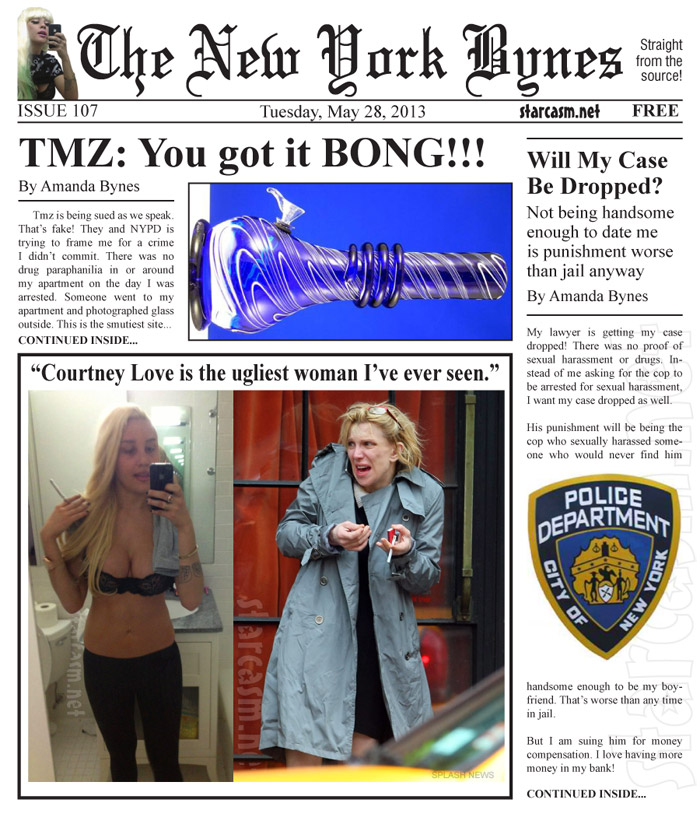 Amanda Bynes continues to take full advantage of the benefits of TwitPlus responding today to more criticisms and accusations aimed at her and her activities over the past few months with lengthy diatribes proclaiming her sanity and the unattractiveness of every other female on the planet. The latest installment of The New York Bynes incudes her reaction to Courtney Love telling her to “pull it together dude,” TMZ’s recent story alleging to have a photograph of what may be the bong Amanda tossed out her 36th floor apartment the night she was arrested, and more info on what Amanda plans to do about the police officer she said sexually harassed her and “slapped my vagina.”

First up we have the Courtney Love feud, which began with Courtney’s tweet “@AmandaBynes pull it together dude.” That tweet elicited a spit take from The Soup host Joel McHale who tweeted, “My largest spit-take since 1988. Thank you Courtney RT @Courtney: @AmandaBynes pull it together dude.” Considering that Courtney Love is one of the most notorious gibberish tweeters of all time, I suppose Amanda should either view the concern as ironic or else a bit of sage wisdom from someone who has been where she’s at. Or she could just be angry and insult how Courtney looks.

@eonline Courtney Love is the ugliest woman I’ve ever seen. To be mentioned by her at all makes me and all my friends laugh!

TMZ posted a photo today of some shards of glass that they claim could be the infamous bong Amanda Bynes allegedly tossed out of her 36th floor apartment the night of her arrest. So how did TMZ find it when the police couldn’t?

Our TMZ producer went on the hunt today and found the shattered glass on the 3rd floor of the building … it’s a sub-roof that can be accessed by using a ladder.

An official in the building allowed our guy to check it out, and he found what looks like a bong — small broken bits of glass, light and dark blue in color, with no markings and no broken bottle ends or tops. Some of the pieces of glass had what appeared to be black residue.

The site goes on to point out that there are cigarette butts all over the sub-roof, so there shouldn’t be much read into the cigarettes in the photo. They also said police were on the scene to check it out.

“@TMZ: Amanda Bynes Apartment — It Looks Like A Shattered Bong? [Photo] http://tmz.me/ZrbnE5” apparently glass=bong right?” Tmz is being sued as we speak. That’s fake! They and NYPD is trying to frame me for a crime I didn’t commit. There was no drug paraphanilia in or around my apartment on the day I was arrested. Someone went to my apartment and photographed glass outside. This is the smutiest site of all. I’ve already forgotten about it! I’m drug free and love talking about it!

And speaking of the NYPD, after they issued a statement earlier denying Amanda’s claims of sexual harassment, Amanda responded by seemingly announcing she would not be pressing charges — but then she suggests at the end that she will be pursuing legal action? Perhaps she is saying she doesn’t plan to file criminal charges, but does plan on filing a civil suit?

My lawyer is getting my case dropped! There was no proof of sexual harassment or drugs. Instead of me asking for the cop to be arrested for sexual harassment, I want my case dropped as well. His punishment will be being the cop who sexually harassed someone who would never find him handsome enough to be my boyfriend. That’s worse than any time in jail. But I am suing him for money compensation. I love having more money in my bank!

That contains two sentences sure to get inducted into the Amanda Byneseum! “His punishment will be being the cop who sexually harassed someone who would never find him handsome enough to be my boyfriend. That’s worse than any time in jail.” You simply can’t make that stuff up.

Stay tuned, the presses are always rolling on The New York Bynes!