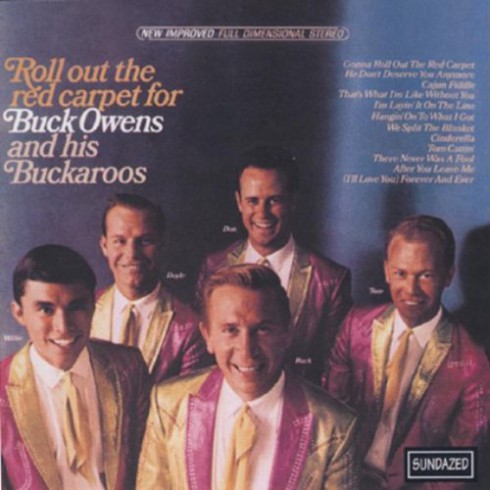 No one has ever proven me more wrong than Mr. Buck Owens. As my world became overrun with a country music renaissance and I started heading back through all, as Hank Williams III puts it, my country heroes, I unforgivingly dismissed Buck Owens as that hokey guy from Hee Haw.  This was where I filed away Buck in my head until a modern-day legend, Dwight Yoakam, convinced me of his importance and caused me to take a good listen to arguably the biggest star of the genre for the entire decade of the 60’s.

Sundazed Records was a small but growing label out of Coxsackie in the Catskills of New York and were renowned for their ability to restore old vinyl records to CD format. They went after Buck’s back catalog releasing an impressive list of many hard to find classic Buck Owens and His Buckaroos records. It was via these Sundazed rereleases that I found my life completely overrun by the immediacy and energy of all this early Owens work. During my own personal Bakersfield invasion one record stood out and has maintained as my personal favorite Buck Owens album, the 1966 gem Roll Out the Red Carpet. 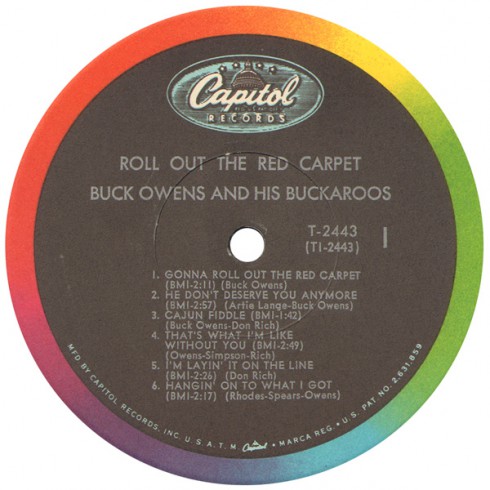 I need to try to explain how powerful this music was for a period of my life. Never before, except perhaps only Bob Dylan while I was but a young man, had an artist demanded all of my musical time in this way. They call it the Bakersfield sound, after the town where Buck made his name-and later canonized with his song, “The Streets of Bakersfield.”

So what is this Bakersfield sound, and more importantly, what was this addictive musical mix that Buck Owens helped to formulate? A portion of Buck’s write-up for The Country Music Hall Of Fame lays it out pretty well:

Unlike most other artists during the heyday of the Nashville Sound, Owens would virtually always record with his road band, giving his records both a distinctive sound and a live feel. From 1963 to 1967, during the peak of Owens’s commercial and artistic career, Owens and Rich were joined by pedal steel player Tom Brumley, drummer Willie Cantu, and bassist Doyle Holly on all of Owens’s records and on the Buckaroos’ own marginally successful releases on Capitol. While Nelson nominally produced his sessions, Owens would shape and control the band’s sound and songs. These factors, and Owens’s desire to keep the same winning song and arrangement formula, helped to create the conditions for his signature style based upon simple storylines, infectious choruses, twangy electric guitar, an insistent rhythm supplied by a drum track placed forward in the mix, and high two-part harmonies featuring Owens and Rich.

Another aspect of Buck Owens’ innovative perspective when it came to making country records was that he made full listening experience albums. There was a focus on how an entire album would sound as a complete listen, which went against the grain of a majority of country artists, producers, and labels of the time. Everything revolved around the hit single.

This dedication to making a great entire album really stands out on Roll Out the Red Carpet. Two instrumentals, “Cajun Fiddle” and the seriously hot-wax “Tom Cattin’,” along with some alternating lead vocals by Buck’s partner in sound and guitar innovator Don Rich resulted in a work that demands to be listened to from beginning to end. 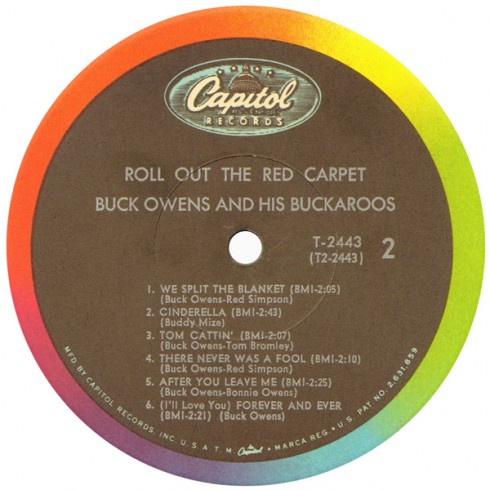 Even to this day country albums that are great as an entire unit are few and far between so in a way, even after his sad passing, Buck is still ahead of the times. Here’s “Tom Cattin'”

A recurring theme in these looking back posts is the importance of an opening track and the pistol shot title track “Gonna Roll Out the Red Carpet” sets the pace for a twang-blistering assault by the primary players; Buck, Don on guitar and fiddle and Tom Bruely on pedal steel.

In many ways the songs on Roll Out are precursors for the country punk genre. The driving rhythms and songs come and go so fast you just have to hit repeat. The longest track on the record, the ballad “He Don’t Deserve You Anymore,” clocks in at a mere 2:57!

Here’s a video clip of Buck Owens and the Buckaroos on Hee Haw performing “Gonna Roll Out the Red Carpet:”

The remaining tracks on the record sequence beautifully with a magical balance of barn burners, ballads, and instrumentals. The Don Rich sung “Lay It On the Line” is darn near rock-n-roll as this unique sound blurred the lines between two seemingly opposite genres of music that have more in common than most realize. This song actually begins the important transitional middle piece three-song-blazer that is back ended by a desperately undervalued Owens song “Hanging’ On To What I Got” and then a unique take on the common love gone bad country theme in the form of “We Split the Blanket.”

Classic video of Buck performing songs from this particular album was hard to come by but I did find this gem of the band from The Buck Owens Ranch Show, which predated Hee Haw, performing “Cinderella.”

In Lindsay Planner’s review of the album via All Music she states that:

While Roll Out the Red Carpet continued the tradition of solid long-players for Buck Owens & His Buckaroos, it ironically was their first album not to have a single in the charts.

With that simple quote therein lies the power of Roll Out the Red Carpet. It is not anchored by any popularized hit song yet as a whole it is for my taste the most definitive example of Buck Owens and the Buckaroos addictive and game changing sound.

Sadly, Roll Out the Red Carpet is currently out of print on CD although you can still buy it from a dwindling pool of sellers on amazon. The songs can also be purchased as part of Bear Family’s triumphant Buck Owens box set, Open Up Your Heart: The Buck Owens & The Buckaroos Recordings, 1965-1968, which features pretty much every single studio recording made by B and the B’s from those three years. (A whopping total of 249 tracks!)

Listen to “Container,” the song Fiona Apple wrote for Showtime’s “The Affair”