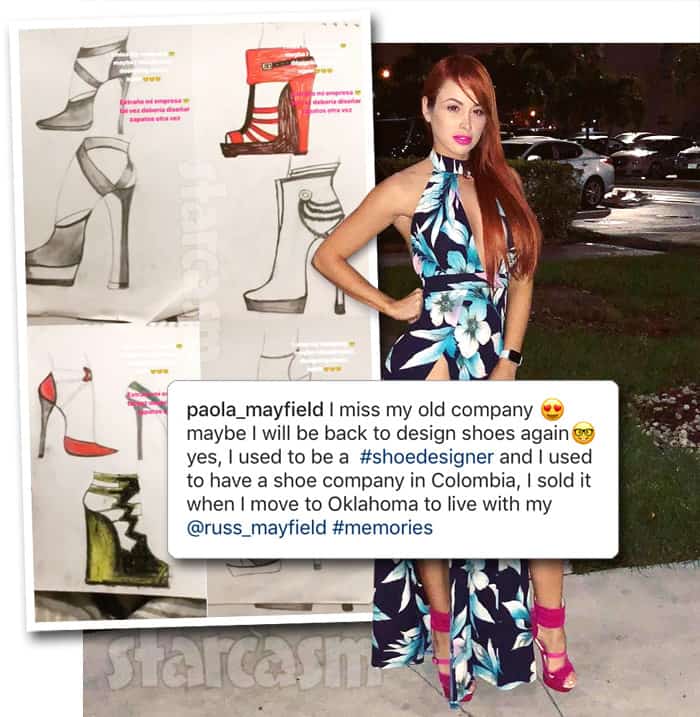 Paola Mayfield’s aspiration to become a professional model has been her central story line throughout her time on 90 Day Fiance and the show’s spin-off Happily Ever After?, but now it seems that Paola is considering picking up her previous career path from her time in Colombia — being a shoe designer!?

Paola has previously talked about being in the shoe business before moving to the United States, and she took to Instagram on Saturday to reveal her interest has been rekindled. She made the announcement along with a video clip that included some of her shoe designs:

“I miss my old company,” Paola captioned the picture, along with a heart-eyed smiley face emoji. “Maybe I will be back to design shoes again,” she added, before answering the inevitable question: “Yes, I used to be a #shoedesigner and I used to have a shoe company in Colombia, I sold it when I move to Oklahoma to live with my @russ_mayfield #memories.”

Here are some screen cap photos of some of the sketches included in the clip:

I should point out that going back to the shoe business is probably not an either/or for this 90 Day Fiancentrepreneur, and I assume she will continue to look for modeling gigs as well as working as a personal trainer.

Designing footwear is certainly not a very common career choice for reality stars, but it isn’t unprecedented. The Real Housewives of Beverly Hills star Lisa Vanderpump had her own “Vander-pump,” and her fellow Bravolebrity Sonja Morgan from The Real Housewives of New York City is launching her footwear line this summer. And let’s not forget Laguna Beach star Kristin Cavallari, who partnered with Chinese Laundry a few years ago for her own shoe line.

So what do you think folks? Will you be buying a pair of Paolouboutins?