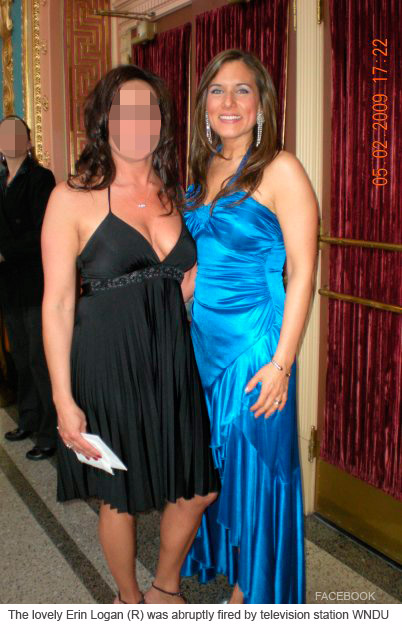 UPDATE June 16, 2010: This case was dismissed June 2, 2010, and no charges were ever filed. Erin is brushing herself off after being abruptly fired from WNDU, and will be teaching at the college level this fall. She’s also landed another broadcasting gig.

WNDU news anchor Erin Logan got into a drunken altercation with former Notre Dame football star Chris Zorich and later got a little too rowdy on the ride home in the back of a police car, leading to an arrest for disorderly conduct. (Read all about the incident HERE)

WNDU reacted very quickly (perhaps too quickly) by firing Erin and then posting this message on their web site under Erin’s mug shot:

It is with deep regret that we report this next story.

One of our own, Reporter/Anchor, Erin Logan was arrested early Thursday morning for being drunk, disorderly and resisting arrest. Ms. Logan was in front of a Mishawaka home after an incident happened inside. She was approached by police and refused to cooperate.

As a result of the incident, Ms. Logan is no longer employed by WNDU.

The page was quickly deleted by the station. Here is a screen capture of the post – click on the photo for an actual-size image: 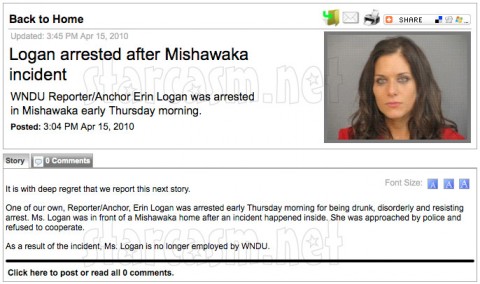 Also deleted were a number of comments. I was only able to rescue the first page – once again, click the image to see a larger version:

The story and comments are still up on WNDU’s “mobile” news page – you can read those (and leave your own!) HERE.

They still haven’t deleted Erin Logan’s bio page from their site, but I’m sure that will happen soon, so here’s what it says (said) for posterity’s sake:

Talking, listening, writing, and building relationships with people..that pretty much sums up Erin Logan’s ideal job and she’s proud to say she got what she wanted. Since she was six years old, her parents couldn’t pull her away from the television when Joan Lunden and Charles Gibson were on.

Erin joined NewsCenter 16 in April 2007 as a 5:30 PM Anchor/Reporter. She recently was a reporter at Fox 35 in Orlando.
Erin says she has the ideal job where she is able to anchor and report five days a week. It’s been three years since she’s anchored and she says it’s wonderful to be behind the desk with the McFaddens, both very seasoned anchors.

The journalism path has been a rewarding experience for Logan. Prior to Orlando, she reported for the NBC affiliates in Boston and Rhode Island. Originally from New England, she says it was unbelievable reporting live as the Red Sox won the World Series and the Patriots won the Superbowl. It was also nice to report on stories close to home and to work with news anchors and reporters she watched while growing up.

Logan graduated Magna C. Laude from Syracuse University in 2000 with degrees in Speech Communication and Spanish. She also has a Master’s Degree in Broadcast Journalism from Boston University.

She started her career in Presque Isle, Maine in 2002 as the weekend anchor/reporter. From there, she went to WIVT in Binghamton, NY as the 6&11 PM co-anchor/reporter.

Outside of work, she enjoys running, spin class, shopping, spending time with family, and traveling to different places. She lives by the motto “work hard, play hard” that her dad taught her at a young age.

In this day and age of media scrutiny it seems a little much to fire someone for disorderly conduct. At least suspend her until the outcome of the trial and/or investigation. On the other hand, perhaps the NBA, NFL and PGA could learn a little from WNDU.

“The Ballad of Erin Logan” The 2-Liter Bomb interview

PHOTOS: Erin Logan of WNDU in South Bend arrested and fired after altercation, no charges were made