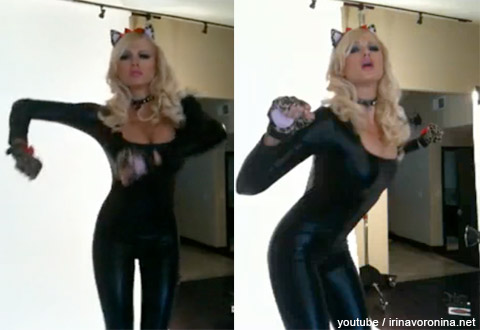 As much as I love a girl in a bunny costume, I think the world might have been a slightly better place had Hugh decided to go with Playboy Kitties instead. (I will refrain from using the other, more vulgar cat word – though it is a nice alliteration.) Maybe he could have done both, with the “kitties” being a little less “girl next door” and more “girl in the alley.”

Ain’t fun sexy? How can I make that my screen saver?

This goes out to Irina, who was recently featured on starcasm.net trying on sexy costumes in preparation for the annual Playboy Mansion Halloween party. She saw the post and tweeted it to all her fans, so of course I’m a big fan now! (She has really nice tweets.) Thanks Irina – keep us updated with what you’re doing and if we ever print up starcasm.net t-shirts we’ll be sure to send you one!

PS – Irina, what’s your middle name? If it’s two syllables and rhymes with Irina, I may swoon. We would have to officially change the banana name game song lyrics from Banana Fanna Fo-fanna to Irina Tina Voronina! I’m feeling light-headed already…