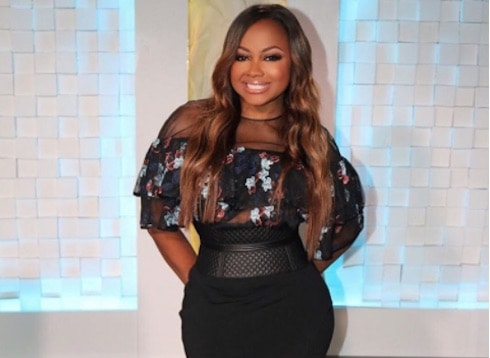 It’s been a long, contentious split between Real Housewives of Atlanta star Phaedra Parks and her estranged, criminal husband Apollo Nida. The reality TV star separated from Apollo in 2014 then filed for divorce last year, but a new sneak peek for the upcoming season 9 of Bravo’s hit reality TV show revealed some good news. The RHOA star’s divorce is close to being finalized and now that Miss Phaedra is single, she’s definitely ready to mingle.

In the new trailer for the upcoming RHOA season 9 premiere, Phaedra invited her bestie and RHOA co-star Porsha Williams over for a ladies’ lunch at her sprawling Georgia mansion. Porsha sat down in Phaedra’s kitchen and while sipping on some homemade lemonade, the newly single women bonded over the “divorcee glow” (Porsha split from her NFL hubby Kordell Stewart in 2013) and were positively giddy as they talked about planning club outings together to find dates.

Phaedra seemed like she was ready to hit the Atlanta dating scene—but she told her bestie Porsha that she would only start dating after her divorce from Apollo is finalized. But it’s safe to say that when Phaedra is ready to date, she won’t be using any online dating apps.

“When I decide to get back into the dating game, I don’t know about this online dating stuff,” Phaedra told the cameras. “They say the people on Christian Mingle are crazy! They murderers! I don’t wanna be on there!”

Watch the full RHOA season 9 sneak peek and remember to catch the season premiere on Sunday November 6 at 8 p.m. on Bravo.

VIDEO PHOTOS Phaedra Parks buys a HUGE mansion – what will it be called?