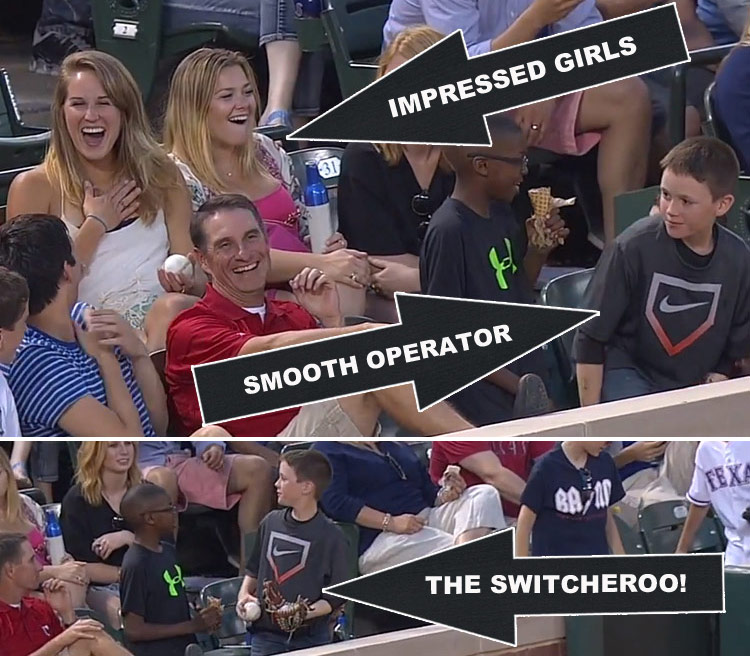 During Saturday’s Major League Baseball game between the hometown Texas Rangers and the visiting Toronto Blue Jays, Austin and a couple of friends were enjoying some prime seats off of the 3rd base side.

The broadcast caught Chaney as he caught a ball tossed up to him from the 3rd base coach. In a sweet moment, he turned around and handed the souvenir to a pretty young lady seated behind him. The girl was beaming at Austin’s act (and so was her friend) of charity – but wait… There was a catch to his catch after the catch:

Sooooooo good. Austin pulled the old switcheroo as he handed the girl a ball that was already in his possession instead of the one he just got from the game!

Of course internet and moms can’t leave well enough alone as local news affiliate WFAA followed up and found out that Austin wasn’t as clever as the clip would have led us all to believe.

“We were getting a few foul balls, but mainly it was foul balls the third base coach caught and tossed them up,” Chaney said. “I was told if I got another ball, I should give it to someone else, so I turned around… I thought I was going to give it to someone deep down there, and I saw her right in front of me and I gave it to her,” he explained.

When Austin’s mom was asked to reflect on the notion that her sweet boy was a lady-killer, she responded in the most awesome mom way possible, “If they only knew him! He trips over the wind blowing!”

As for Austin’s take on his new-found fame? “I think it’s kind of weird,” he answered.

That and his mom’s reply are as American as apple pie and, well, baseball 🙂