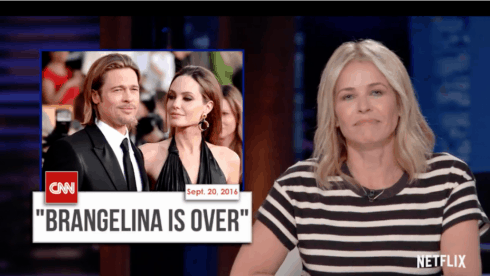 Since news broke of the Brangelina split, it seems everyone is weighing in with their opinion as to what went wrong– including Chelsea Handler.

Jennifer Aniston’s BFF has never held back when it comes to her disdain for Angelina Jolie. Over the years, Chelsea has gone on record calling Angelina a “home wrecker”, a “f–king c–t”, and a “f–king b–ch”. 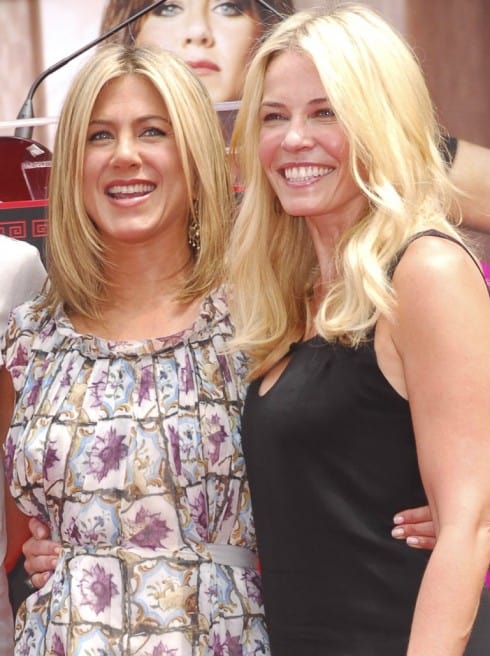 In a clip from her Netflix series Chelsea, the comedienne blasts Brad and Angelina’s relationship, takes aim at their children, and calls Angie a “f–king lunatic”.

The clip is definitely NSFW, but you can read the transcript below.

There are rumors that part of the problem was that Brad was allegedly drinking and smoking too much weed. I wonder why he would need to self-medicate. Maybe because he could have been spending the last 12 years at Lake Como hanging out with George Clooney and Matt Damon instead of being stuck in a house with 85 kids speaking 15 different languages. Oh, yeah, and because he married a f–ing lunatic, that’s why. But we should all respect their privacy during this very difficult time so this will be the last time I speak of this on TV. You can follow me on Twitter.

In reality, allegations of Brad’s substance abuse could be a serious issue.

The latest report claims that Brad is being investigated by the LAPD as well as the L.A. County Department of Children and Family Services for allegedly getting abusive with his kids following an incident on a private jet.

According to sources, this was the straw that broke the camel’s back and prompted Jolie to file for divorce.

Given the situation, I’m not sure Chelsea’s comments were in good taste. But 1.) Her diatribe was written before the abuse reports surfaced and 2.) When has Chelsea ever cared about being tasteful or respectful?

Do you think Chelsea’s commentary was funny or too harsh?

What is Brad Pitt and Angelina Jolie’s mystery movie project?