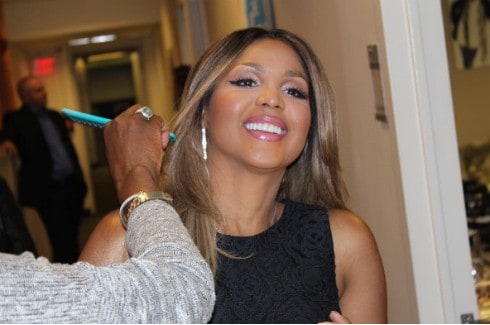 Toni Braxton has been hospitalized again after suffering complications of Lupus. Due to her recent health setback, Toni announced that her Cleveland show, which was scheduled for Saturday night, would have to be postponed. The new concert date will be released soon according to a post she made on Instagram regarding the sudden change in plans.

Toni made headlines after her Friday night performance in support of her current “The Hits” tour in Kansas City. The “Unbreak My Heart” singer has been rumored to be dating Cash Money Records CEO Birdman and during the Friday concert, she pulled her rumored boyfriend up on stage. Toni looked amazing at the Kansas City show and Birdman also looked happy to be there.

Fans have been worried about Toni Braxton due to a similar hospitalization earlier this month. The singer confirmed that she spent a few days in a Los Angeles hospital prior to going on tour because she was suffering from complications of Lupus then as well. Toni’s rep made it clear that her current condition was not serious and that the singer just needed to stay on top of the autoimmune disease.

Soon after leaving the hospital at the beginning of October, Toni reassured fans that she would be fine and issued a statement about her plans to begin touring. So far, two shows have been postponed including the most recent Cleveland show but none have been canceled. The Oakland performance that was set to kick off Toni Braxton’s “The Hits” tour on October 8 was rescheduled for January 28.  It is unknown if Toni’s Sunday concert in Chicago will also need to be rescheduled. Ticket holders should hold on to their existing tickets, which will be honored on the new date.

Hey guys, thanks for all of your well wishes and understanding. I am out of the hospital, and en route to CHICAGO! I can not wait to see you

all TONIGHT at the Arie Crown Theater!! #TheHitsTour ❤️

For information about Toni Braxton’s “The Hits” tour and to purchase tickets, click here.

Toni Braxton home after hospital stay for Lupus scare, Birdman rushes to her side