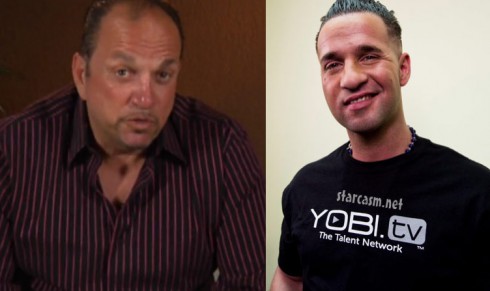 The Situation’s old man has been engaging in an all out character assault on his Italy tanning reality superstar son.  Previously, we posted a run down on some of the straight up call outs pops Sorrentino was firing at his boy who he claims, “broke his heart.”  As part of this campaign Frankie S. has launched a website and posted numerous videos that are filled mostly with reflections of a father’s disappointment in his son.

While our GTL crew from Jersey Shore have set themselves up pretty by believing that there’s no such thing as bad publicity apparently the familia sitch for Michael has been too much as he’s called in his suit sharks to fire back at The Confrontation with some legal threats.

According to TMZ the lawyer for Michael sent Frank an email warning him that a lawsuit and an injunction was coming to shut down his website.  The rep for pops said they ain’t shutting it down and they aren’t too worried about the threat either because in said email they refer to a “law suit.”  That’s lawsuit – one word – so The Sitch’s lawyer or legal assistant might as well consider themselves confronted.

For an additional taste here’s another recent Confrontation video in which he discusses an alleged Situation sex tape and the headaches that it brought him and his family. It involves the old man calling his son an a-hole, an angry family trying to run over Mike with a truck and some alleged quality time between Mike and his buddies in the basement as they watched him do the deed with his ex:

Are Sammi Sweetheart and Ronnie back together for Season 2 of Jersey Shore?