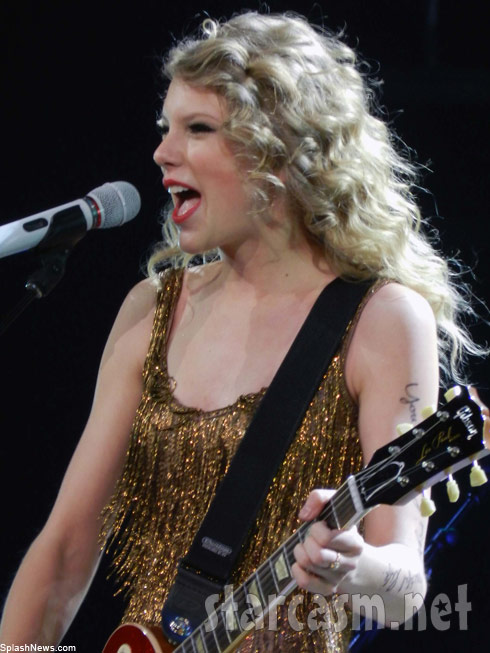 Taylor Swift had one last finishing touch to attend to leading up to the highly anticipated North American leg of her Speak Now World Tour.  She’s put together an elaborate stage set including multiple choreographed dance routines as well as set and wardrobe changes.  To make sure she had things ready to roll she ran through one last full dress rehearsal in Nashville but with with a special Taylor-twist.

The mega-star opened up the doors to what is usually an empty seat affair as a benefit called Speak Now…Help Now to aid in the tornado relief efforts and it was, like seemingly everything she does, a smashing success raising nearly a million dollars.  The place was packed with admission tickets going for $50.00 a piece.  Taylor announced that all proceeds from the evening including tickets, tour merchandise and donations would all be forwarded to aid the victims of the recent string of terrible storms.

As a little aside, before you get too carried away that is not a new tattoo on Taylor’s arm above. She wrote the lyrics to her friend Selena Gomez’s song “Who Says” and it read, “You’ve got every right to a beautiful life.” 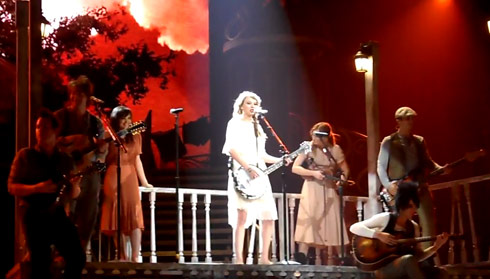 For those lucky enough to get a golden ticket they were bombarded with a live show unlike anything seen in the genre of country since perhaps Garth Brooks’ heyday.  Dancers swung from wires holding sparklers, there were spiral staircases and a gazebo, three gigantic video screens, confetti snow and even a small stage hidden in the back where she performed the songs “Fearless” and “Last Kiss” on ukulele.  When you sneak in a uke you got my respect.

Needless to say the 21-year-old has come a long way in a short period of time.  Here are two videos posted by a fan that are pretty great quality wise.  They both feature Taylor on Banjo – first up is her, her dancers and singers performing “Mean.”

And here is Swift front and center for the intro of her mega-hit and beginning of “Our Song.”  The crowd collectively loses it when they realize which song is being performed.  I lost it for the sexy fiddle player because, well, she’s a hot fiddle player!

The North American leg of her Speak Now Tour is set to begin on Friday with a two-night-stand in Omaha, Nebraska.

In additional Swift news because girl stays busy you know, she did her usual awards show dominating by picking up the “Top Album Artist” and “Top Country Artist” awards at the Billboard Music Awards last night.  Here’s a photo of Swift with her booty: 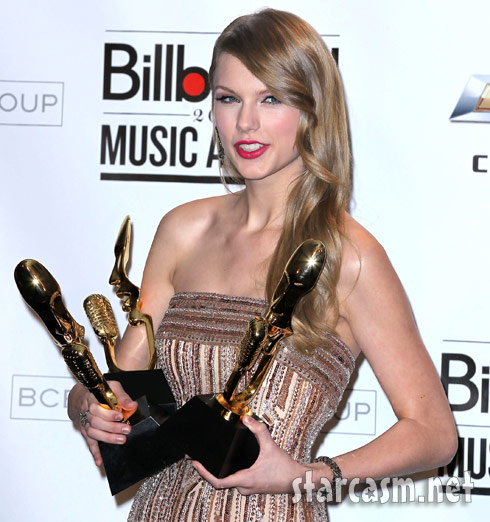 Scoring some serious bank for charity, fans screaming with glee as each song is recognized and reeling in some awards in front of millions.  That’s what she calls a weekend.  Speak Now and forever hold your pieces of hardware right Taylor!