Ted Haggard step aside, you are no longer number one on the anti-gay Christian conservative outed list.  This dubious distinction now lands on the shoulders of Mr. George Rekers thanks to a little photo taken of him with the above Rentboy escort after a ten day jaunt to Europe (If you are wanting a photo of Mr. Rekers I apologize, apparently the inset ‘stached one above is the only one in existence).

The story was broken by “The Miami New Times” and it looks like they sure had a blast reporting this one.  Our man Rekers has been virulently against homosexuality and has been speaking out against it for a long long time now.  We all know the person who is most ardently anti-gay is probably gay so in actuality this isn’t too big a shocker.  Rekers’ explanation for the escort however is set on full stun.

“I had surgery, and I can’t lift luggage. That’s why I hired him.”

UPDATE – The Miami New Times has posted the now-infamous photo of who they claim is Rekers and his bellboy! Reker’s defense seems a little weak given the fact that in the photo he is handling his own luggage and all Rentboy is doing is standing there looking good to go in his KC and the Sunshine Band outfit and money man purse! Here’s a cropped thumbnail – head over to the Miami New Times blog to see the full Monty! 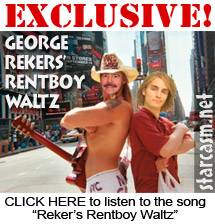 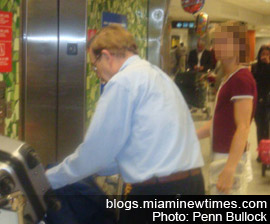 It is important to note that he was hired from Rentboy.com (adult escort site with adult images, link not provided) per the escort himself.  The escort in question was “outed” on Unzipped.net by researching the descriptions listed in the Miami New Times Article:

The pictures on the Rentboy.com profile show a shirtless young man with delicate features, guileless eyes, and sun-kissed, hairless skin. The profile touts his “smooth, sweet, tight as*” and “perfectly built 8 inch c**k (uncut)” and explains he is “sensual,” “wild,” and “up for anything” – as long you ask first.

The young man in the image above is the one identified by Unzipped.  So how influential is George Rekers, well he co-founded the Family Research Council with James Dobson a steadfast Christian based anti-gay lobbying group in Washington D.C.  The Family Research Council is famous for its annual Values Summit that is widely considered a litmus test for Republican presidential hopefuls.  He sits on (get this)  the National Association for Research & Therapy of Homosexuality (NARTH), known for their attempts to turn gay people straight.

The Miami New Times did their work and unearthed some emails sent by Rekers to the Rentboy:

“I’d like to propose another trip to Rome, Italy, for a week or more,” Rekers wrote in an email dated March 21 obtained by New Times. “This is so exciting to have a nice Travel Assistant and traveling companion! Wow! I’m so glad I met you.”

“I called and talked to the reservation guy in London and reserved a room with two twin beds,” Rekers wrote on March 26.

Ohhh fun trip time!  This doesn’t look good for Mr. Rekers I have to admit but what I have found most astounding in writing this up is how little social media there is on this guy who is so prevalent in public discourse and politics.  I mean one grainy mustache photo, nothing on Youtube, help us bloggers out here Rekers!  Since there isn’t I’ll just insert the same image again (we’ll call it the double-double ‘stache):

I did round up the following from his blog that reflects a little of his obsession with homosexuality and his stance:

“Perhaps you know a teen who is thinking about getting a “gay marriage” someday. Or maybe you are a teen thinking about someday traveling to California to have a gay “marriage.” I would recommend that you first stop to think about all the implications, and discuss the idea with the people who love you most in your family circle and in your church, synagogue, or other religious house of worship. And also, think about the possibility (although you can’t even imagine it would be even possible right now) that you could become excited about a heterosexual marriage if you got the right kind of effective therapy. Anyone wanting more information on therapy or therapists for sexual reorientation therapy can find it at www.narth.com which is the website of the National Association for Research and Therapy of Homosexuality. Many Christians with same-sex sexual attractions have obtained help through www.exodus-international.org which is the website of Exodus International.”

About half way through that and I would have thought “I bet this guy is gay.”  if I wouldn’t have already heard about the whole Rentboy thing.  I can’t believe guys like this believe what they believe.

Lamar Odom reportedly dying; Khloe Kardashian said to be preparing for the end