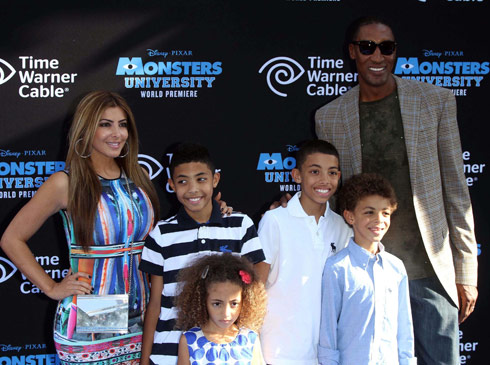 Photos circulated earlier of a dude being taken off in a neck brace via ambulance after he was said to have had a run-in with retired NBA star Scottie Pippen. Speculation ran rampant as to what this man might have said or done, and if he deserved the beat-down he received. If the latest reports are accurate, the man had it coming and then some.

Pippen was out enjoying dinner with friends at a popular spot in Malibu, California on Sunday evening where sources tell TMZ that a belligerent and drunk fan continued to pester the Chicago Bulls legend. When one of Pippen’s pals got up to use the restroom this unnamed person was said to have taken the vacated seat and continued on with his aggressive badgering. Scottie kept his cool, simply asking the guy to leave.

When Pippen was leaving the man approached him outside for a photograph which he agreed to. This wasn’t enough for the guy apparently as he insisted on an autograph to which Pippen refused. The man was then said to have acted out after the rejection, calling Pippen the N-word, shoving and then spitting at him as his family was present.

Sources stated that Pippen was sent over the edge when he witnessed the spit hit his daughter.

The man was carted off to the hospital with serious injuries to his back, head and face. The police spoke with Pippen following the incident and there was no arrest.