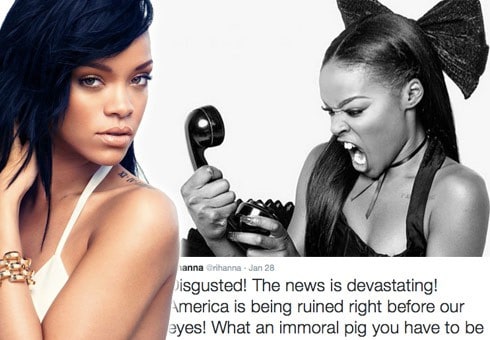 Rihanna has all kinds of shade under her umbrella for social media provocateur Azealia Banks.

The latest feud between the singer and rapper started when Rihanna sounded off on Twitter about her disapproval of President Donald Trump’s executive order temporarily banning travelers from seven Muslim-majority nations from entering the United States:

Disgusted! The news is devastating! America is being ruined right before our eyes! What an immoral pig you have to be to implement such BS!!

“As far as rihanna (who isn’t a citizen, and can’t vote) and all the rest of the celebrities who are using their influence to stir the public, you lot really REALLY need to shut up and sit down. Stop chastising the president. It’s stupid and pathetic to watch. All of these confused people confuse other confused people. Hoping the president fails is like getting on an airplane and hoping the pilot crashes. What makes you think, the the USA is going to enter the Middle East destroy a bunch of s**t and pull out without any real repercussions ????”

The hashtags #stayawayfromthechickens, #iheartnuggets and #saveourhens are important clues in deciphering that this was a direct dig at Banks. A while back Banks, who’s been caught up in all kinds of controversies including accusing Russell Crowe of choking her and calling her the “n” word, posted a video of herself cleaning up blood from a closet where she claimed to have performed years of ritualistic killings of chickens.

If you HAVE to, here’s that video but we’ll warn you it’s a tad disturbing:

Azealia Banks via instagram, cleaning the closet she's been performing brujeria for 3 years in. pic.twitter.com/0OsoSdJynw

Banks then screen grabbed Rihanna’s Instagram image and reshared it with her own take of what she thought the caption should say. “What rihanna meant was …. “I GREW UP PLAYING SOCCER IN A DIRT YARD WITH A COCONUT AND OPEN MY LEGS FOR ANY AND EVERY MOTHER***ER WHO I THINK I CAN GET TO WRITE ME SONGS OR BUY ME DRUGS. I CAN BARELY PERFORM BECAUSE I LINE MY BROWN BLUNTS WITH CRYSTAL METH AND AM OFTEN VERY WINDED ON STAGE,” Azealia wrote.

With the ball back in her court, Rihanna then shared this image to Instagram:

the face you make when you screaming in an empty room

Banks kept the heat turned up by posting some video rants about Rihanna before they both finally dropped the war of words. Azealia did get in one last threat before she let it go. “I Am a Witch, don’t push me. Knocking me down is the easy part. If you want me to stay there trust me, you will need back up,” she warned.