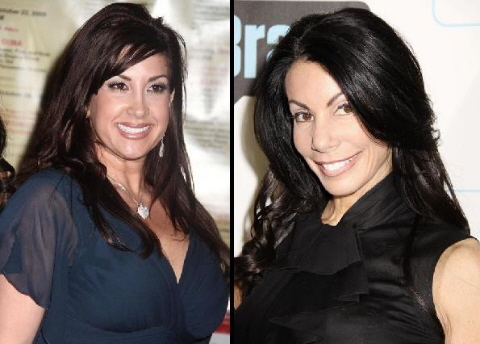 Jacqueline Laurita from Real Housewives of New Jersey had a little something to say about the forthcoming sex tape from her co-star Danielle Staub.  Via her Twitter page Laurita dropped a bomb with a stunning accusation of who she thinks leaked the raunchy romp:

These Jersey girls don’t hold back!  When you have a tweet that accuses you of leaking your own “disgusting” sex tape followed up with an “I pity your kids” comment you have yourself a triple-shot of low-down dissing.  There hasn’t been any comments from the Staub camp but I guess that’s what they have a TV show for.

(You can see SFW preview images from the sex tape HERE.)

As fans of the show know, there is no love loss between Laurita and Staub.  Jacqueline’s most recent Bravo blog from May 31st is a novella-length frontal attack on all things Danielle.  As a lead in she wrote:

Danielle is a character on our show that has had a big negative influence on my life as well as many others I care about. As long as Danielle is on our show I WILL vent my frustrations about her on here.

Viewers of RHNJ better buckle-up, it looks like Jacqueline and Danielle are on a SERIOUS collision course. They may need riot police at the Season Two Reunion Show, especially if Danielle Brings her felonious bodyguard Danny Provenzano along!