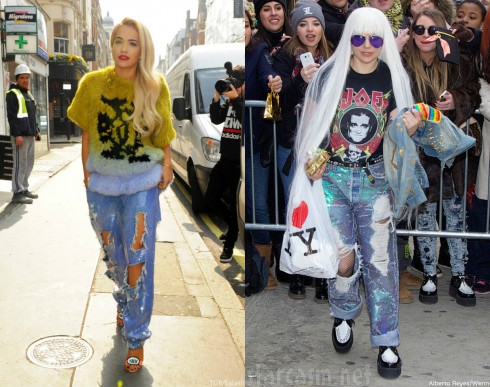 Lady Gaga and Rita Ora’s pants both survived terrible accidents this week. Unfortunately, neither of the singers’ jeans escaped unscathed — giving us a fairly epic Who Wore It Better battle of the distressed denim.

Rob Kardashian’s secret ex-girlfriend paired her shredded and sequined Ashsish pants with fuzzy short-sleeved sweater and a pair of open-toe heels that begged us to “talk” about it. She was spotted outside Capital Radio studios.

On her last day as a 27-year-old, Lady Gaga dressed herself in Dog Harajuku jeans over fishnet tights. She paired it with a faux vintage Joe Pesci t-shirt (or, as one commenter suggested, maybe it’s her dad), purple sunglasses and a nearly ground-length platinum wig. It was actually pretty understated by her standards.

Selena Gomez vs. Celine Dion: Who wore it better?

Anne Hathaway on body issues: “Am I thin enough? Am I too thin?”