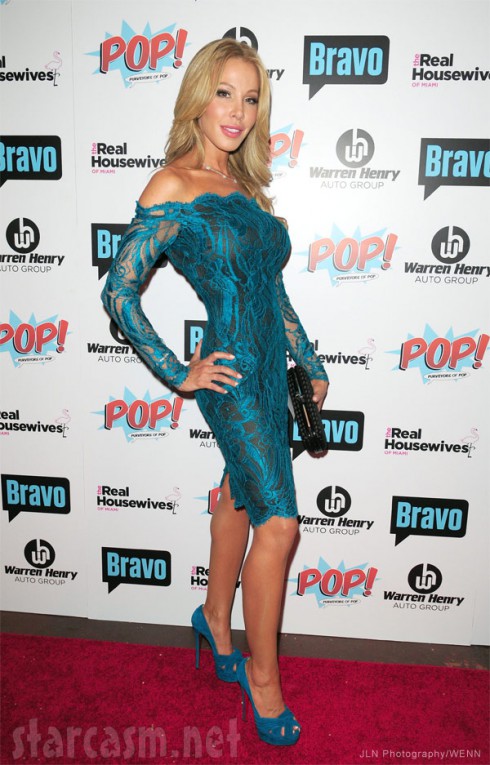 The Real Housewives of Miami star Lisa Hochstein is married to one of the most successful plastic surgeons in the country, so it’s only right that she be as close to perfect as humanly possibly. While she may be pretty close at the moment, it wasn’t always that way. In fact, she needed some assistance from her plastic surgeon husband after a breast augmentation surgery gone wrong.

“I got my first boob job when I was 19,” Lisa tells In Touch. “Afterward, my breasts were very close together, like a uniboob, and a little lopsided.” After a year of dating, Lenny Hochstein (aka “The B00b God”) finally gave in and put his then-girlfriend under the knife in 2008.

Here are before-and-after photos of Lisa Hochstein’s most recent b00b job with her “uniboob” clearly evident on the left in a photo from Playboy:

“Lenny admitted it wasn’t the best [b00b job], but he was hesitant because he doesn’t believe in [surgery] unless it’s like absolutely necessary,” Lisa explains. Lenny is also picky about who he operates on. Their housekeeper has been wanting a little re-do but she must lose weight first.

The Real Housewives of Miami star is now a size D and as happy as she could be with her new assets — and so is her husband whom she married just one year after her boob job. “My breasts look natural,” she says. “And they’re very soft to the touch.” Good to know.

Lisa is a walking testament to the fact that “there’s no one better at breast augmentation than my husband!” Like she always says, she’s pretty much a walking business card for her man and he’s definitely not lacking in business.

For more of Lisa Hochstein and her perfect ta-tas, tune in to Real Housewives of Miami every Thursday night at 9/8c!