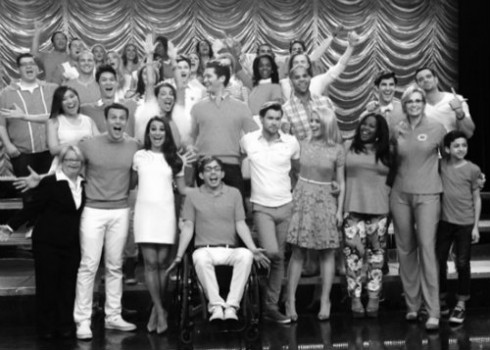 After six seasons, filming for Glee wrapped on Saturday — prompting a wide range of emotions from the cast.

“Tears were flowing like blood in a red wedding,” Chris Colfer told ET Online on Sunday. “I wasn’t even expecting it to be so emotional, but it was pretty emotional.”

Co-star Jonathan Groff added the mood on set was “happy-sad.”

“I was there for the final shot and it was really emotional and celebratory,” he said. “It was really special. I felt really lucky to be bearing witness to that. Those guys do an hour-long show for 22 episodes and they’ve been doing it for seven years. That’s a lot of hours clocked. So I think it was a really special moment for everybody.”

The last day was especially bittersweet for Lea Michele, who met Cory Monteith on the show. The onscreen sweethearts were dating in real life when Cory passed away in July 2013 from a drug overdose. Although returning to the place where they met and spent so much time together would seem incredibly difficult to most of us, Lea later said the Glee set felt like home and it helped her to go back after Cory’s death.

“It’s been the most incredible 6 1/2 years,” Lea said on Instagram this weekend. “I’m going to miss Rachel Berry so much.”

She followed that up by posting a beautiful picture of her leaving the set with one meaningful souvenir: The No. 5 football jersey worn by Cory’s character, Finn Hudson, on the show.

Co-star Kevin McHale told BANG Showbiz this month that he believed there would be some mention of Cory’s character in the series finale.

“I think he is always remembered and especially at a time like this at the very end, there will definitely be some sort of mention of him,” Kevin said. “He’ll be involved in some way.”

The two-hour series finale of Glee is scheduled to air on March 20.

VIDEO: I think this Glee stuff might be getting out of hand!