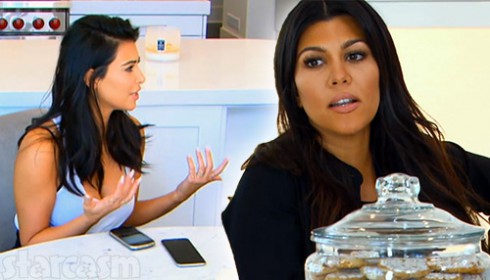 When Kourtney Kardashian initially refused to appear in Kim Kardashian’s mobile game, the younger sister lashed out and accused Kourtney of mooching off her success.

The argument plays out in the upcoming episode of Keeping Up With the Kardashians when Kim approached Kourtney and Khloe about having their likenesses in her Kim Kardashian: Hollywood game. However, Kourtney said she wasn’t interested if she wouldn’t get some kind of cut.

“Kim’s making it seem like she’s doing us a favor by having us in her video game,” Kourtney said in her interview. “All these other people are doing it. I’m pregnant. I have a lot going on. I don’t need to put myself into one more thing.”

Kim had a different take on the situation, saying she “would do anything” to help her sister out when they were beginning their careers, so it was time for Kourtney to return the favor.

Kim’s frustration with Kourtney apparently only grew over the next few days — and she was sent over the edge when Scott Disick suggested she buy Kourtney a pair of shoes to help persuade her.

Although Kourtney kept her cool through Kim’s outburst, she looked a bit exasperated by all of the drama. It seems Kim ultimately wore her down, because she and Khloe officially joined the game in December.

To watch the fight play out, tune into Keeping Up With the Kardashians on E! on Sunday at 9/8c.