After scoring a People cover last week, Kate Gosselin thought it would be a good idea to take her 13-year-old daughters Mady and Cara Gosselin onto live television to further prove how happy the family is. Unfortunately, that plan seemed to backfire — instead resulting in what one Facebook commenter called “the most uncomfortable interview I ever watched.”

The segment began with a recap video of the Gosselins experience on Jon & Kate Plus 8. Then Today‘s Savannah sat down with Kate, Mady and Cara…

Savannah: Mady, what would you want to say about how you and your sister and your family are doing.

Kate, snapping her fingers: Mady, your words. Just spit it out.

At this point, Mady and Cara looked to each other for support — seemingly unsure what their mom wanted them to say.

Savannah: It’s hard. It’s a hard question. What about you, Cara?

Cara looked directly to her mom. (This made me think of Jon’s comment that “you can’t breathe wrong without upsetting Kate.”) 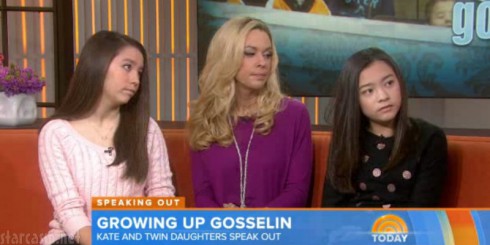 Kate: So, this is their chance to talk. This is the most wordless I’ve heard them all morning. I don’t want to speak for them, but Mady, go ahead. Sort of the things that you said in the magazine. That years later, they’re good, they’re fine…

Mady: No, you just said it.

Savannah: Do you think people have the wrong impression of you guys, Cara?

Cara looked to her mom and sister.

Kate: Yes or no? The interpreter. What is she thinking? Do people have the wrong impression of you?

Mady: I wouldn’t say wrong. I would just say not the full story. Like a lot of people think that filming our show has damaged us. But, it’s only really helped, not really done…

Kate, interrupting: They are more aware of what is out there. You know, the inaccuracies, the things that are said by the general public, their father, whoever in general because their friends talk about it at school… We talk about it a lot. The most upset they are is that they get really frustrated that people assume certain things in our house. And they always say, ‘But that’s not how it is, Mommy. Why do they say that about us?’

Savannah: But, let me ask you, Kate. To have them come out here, to do a big magazine article, to have them on national TV and kind of put them on the spot… Is that helpful to them? … Or does that kind of continued exposure continue the injury to them?

Kate: There is no injury to begin with… I can’t get them, at this age, at 13, anything they don’t want to do — as with any parent…. This was, ‘Hey, so the Today Show asked us… How do you feel about it?” They agreed to it… I’m getting to the point where I’m extremely frustrated. And I don’t spend time worrying about it, because I’m busy raising my kids.

PHOTO Kate Gosselin looking like the HBIC on set of Extra