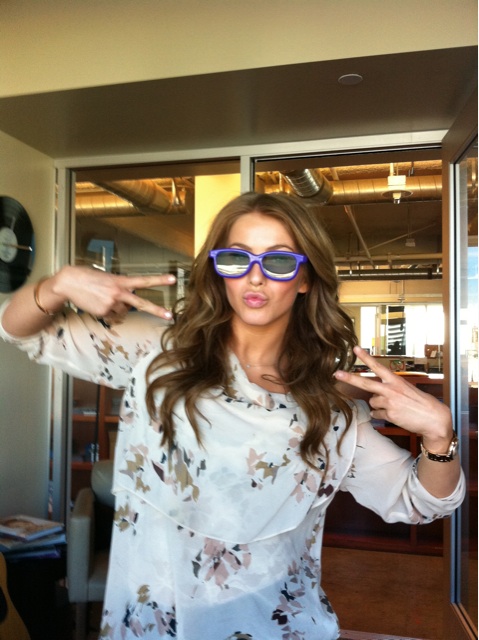 Julianne Hough does a pretty darn good Bieber pose!  The above photo was posted to her Twitter account as a shout out to pop phenomenon Justin Bieber.  Here is what Hough, Ryan Seacrest’s number one gal, tweeted:

Hough has recently been in the news for something other than her performances on Dancing With the Stars or the romantic link to Seacrest.  A recent music video for the song “Is That So Wrong” was banned from CMT for being too hot.  The video shows Hough in some seriously short shorts and a bra prancing around a bedroom set doing flips etc., otherwise known as Saturday nights at the Seacrest pad.

I would embed said video but the powers that be disappeared that sucker from the interwebs.  That is some serious Seacrest power at work folks.

So what does a girl have to do get and stay famous these days?  You are a mega hit on Dancing With the Stars, you do a too racy for TV video, you toss tweet outs to the Biebs.  The only thing left would be a sex tape but the downside is that it just might involve Ryan and no one wants that.

One more piece of additional Hough news that I found interesting AND disturbing.  She’s set to play the lead Ariel in a remake of Footloose.  Recycle Hollywood is tackling Footloose!?!  Is nothing sacred anymore, I mean only one man can save a town with dance and a tractor and that will always be Kevin Bacon.