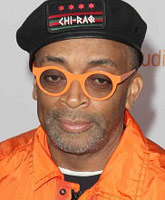 Spike Lee announced on Instagram this morning that he will not be attending the 88th Academy Awards because of the lack of diversity in nominees highlighted by the #OscarsSoWhite hashtag campaign. According to People, this will be the second year in a row that Lee has chosen not to attend Hollywood's most glamorous awards show.
Read More...
Read More...
We use cookies to ensure that we give you the best experience on our website. If you continue to use this site we will assume that you are happy with it.OkNoPrivacy policy