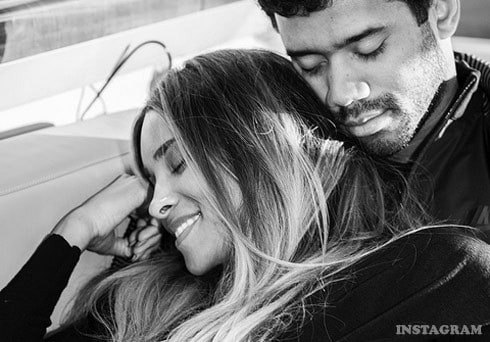 It looks like all the bed wrasslin’ singer Ciara and Seattle Seahawks quarterback Russell Wilson bragged about participating in following their wedding has paid off!

They each shared the same lovely black and white photo of themselves embracing to Instagram last night to announce that they are expecting a baby.

Ciara wrote, “On this special Birthday I received an abundance of love from friends and family.. and I’m excited to Finally share one of the Greatest Gifts of All that God could give… ?????☺️❤️”

And Russell Wilson added, “The Greatest Blessing of All. Forever Grateful. #BabyWilsonOnTheWay”

On this special Birthday I received an abundance of love from friends and family.. and I'm excited to Finally share one of the Greatest Gifts of All that God could give… ?????☺️❤️

Ciara, who is already a mom to 2-year-old son Future Zahir with rapper Future, was celebrating her 31st birthday.

Wilson, a devout Christian, made headlines when he revealed that he and Ciara were practicing abstinence until they got married. “But that doesn’t mean it’s been easy! I ain’t gonna lie to y’all now—I need you to pray for us. I know y’all have seen her on the screen. If there’s a 10, she’s a 15,” he told a congregation at the time.

#BVD ““Before I formed you in the womb I knew you, before you were born I set you apart…”
Jeremiah 1:5 NIV