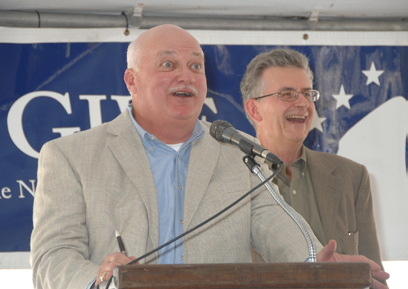 Co-host of the conservative talk show Grandy and Andy Morning Show on WMAL Andy Parks has reportedly been fired by the radio station.  Sources with dcrtv.com say they witnessed Parks packing his things after his on-air shift on Friday.  His famous partner Mr. Fred Grandy (Gopher from the Love Boat) and former U.S. Representative from Iowa will remain as an on-air personality at WMAL according to dcrtv.com.

Parks has had his share of controversy while being on WMAL.  He stated on air that he had no problem with public school officials outing homosexual students to peers, friends and family.  Before that incident Parks stated that he walked up to people of Hispanic origin and would flat out ask them if they were illegal immigrants.  What a shock, political talking head radio hosts saying something to “shock” the listenership.  Yawn.

There has been no comment from Parks on the situation and what his future plans will be. Here is a clip of Andy at his previous job:

Usual right leaning stuff there.  But what is with the not Grandy or Andy young dude with the Michael J. Fox jacket vest?  Don’t tell me that guy still has a job.  No word yet on if WMAL has found a Mandy or a Randy or a Sandy to co-host so the show name will still jive and have that cool ring to it.

UPDATE: WMAL has made an official statement about the departure of Parks:

“Andy Parks, a name synonymous with 630 WMAL for nearly 25 years as morning host and airborne traffic reporter, is no longer with us. Andy is an extraordinary talent, consummate professional and friend. Andy, we salute you and thank you for your immeasurable contributions to WMAL”