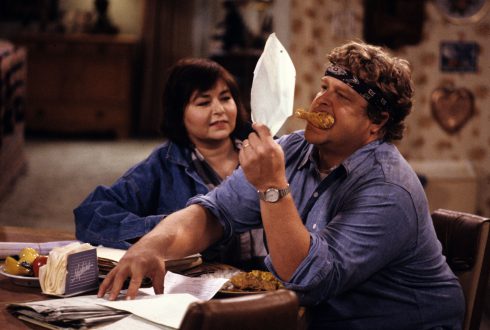 Roseanne’s first husband was Bill Pentland, a motel clerk she met in Colorado after running away from her Salt Lake City, Utah home. He’s pictured below with her shooting an episode for Roseanne called “The Memory Game,” which aired December 13, 1988. They had three children together, Jessica, Jennifer, and Jake. They married in 1974 and several years into the marriage Roseanne tried her hand at stand-up comedy routines based on her life as a working class “domestic goddess.”

By 1985 Roseanne had garnered star-making spots The Tonight Show and David Letterman and soon had her own award-winning HBO stand-up special. By 1988 Roseanne, a show based on her own life, was on the air. Her husband Bill Pentland was listed as “executive consultant” on every episode until 1991. They were officially divorced January 16, 1990. Four days later Roseanne was married to her second husband.

Roseanne married Tom Arnold January 20, 1990. He was a fellow stand-up comedian she met when her opened for her in Minneapolis in 1983. She brought him on as a writer for Roseanne. At the wedding reception Tom proclaimed: “We’re America’s worst nightmare: white trash with money!”

Roseanne and Tom’s relationship was extremely creative, but also tumultuous. The pair both thrived on attention and controversy and lived up trying to get into the headlines as much as possible. “The one good thing about Tom was that he did push through  my ideas,” Barr said in 2008. “I’d go, ‘I want to do this,’ and he’d say, ‘I’ll make sure it happens.’ I was always trying to find the way to say the right thing at the right time in the right way. That was kind of my art, the thing that turned me on.” Tom later revealed he had struggled with a pretty several cocaine addiction for decades, including during his marriage to Roseanne.

During the first months of her marriage to Tom, Roseanne performed her infamous rendition of The National Anthem at a Padres game. She sang exasperatingly off-key and grabbed her crotch during the performance, earning a rebuke from president George H. W. Bush. Pretty much every one in America got her hear the torturous sounds because the clip was so incendiary it went old school “viral” on TV news and celebrity shows.

During this time Roseanne opened up in an autobiography Roseanne: My Life as a Woman that she had been severely traumatized as a child by her family, suffered from incest from her father (she later clarified that there was no “sex,” just violence, humiliation, and boundary crossing,) struggled with crippling mental health issues, and had had a turbulent marriage to first husband Bill. Her family denied any abuse and threatened to sue People Magazine for printing things Roseanne had said about them. In her 2011 book Roseannearchy: Dispatches from the Nut Farm Roseanne reflected on how she handled the situation, realizing that she maybe should have handled her words differently.

“I had lost all perspective and thought of myself as a commodity, a brand, an example, and an avenger. I was angry that my parents never responded to my requests over a period of a year to meet with me, and to talk about the reality of abuse in our family. I exploded.

I was miserable then as a person can be. I felt tormented and disconnected, had lost myself totally in an often violent and abusive relationship, and felt under attack from every direction.”

Their union came to and end when she filed for both a divorce and a restraining order April, 1994, saying he physically and verbally abused her. “I now realize that I have been a classic battered and abused wife,” she said at the time. The couple had recently “married” a female assistant, Kim Silva, as a publicity stunt. She was also fired and cited as a reason for the divorce. She later withdrew the battery charges. 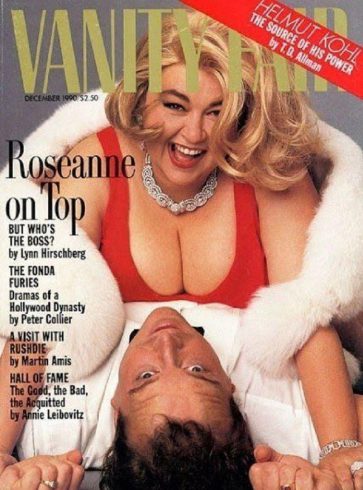 Now Tom’s one of Roseanne’s strongest critics when it comes to her political ideas and theories. He most recently spoke out asking her and ABC, the networks that airs Roseanne, to apologize for the conspiracy theories she tweets about.

Ben Thomas was once Roseanne’s security guard, but he became her spouse on Valentine’s Day, 1995. She was pregnant at the time with their son, Buck, who she conceived via in-vitro fertilization. While they were together, Roseanne underwent gastric by-pass surgery. Roseanne the show officially ended in 1997, which was no doubt a stressor in Roseanne’s life as she had tied so much of her identity up with the show.

Unlike her previous marriage to Tom Arnold, Roseanne’s relationship with Ben Thomas rarely made headlines. Things only got ugly during a custody dispute in 2011 because he wanted Roseanne to pay for his trips to visit their son Buck at Roseanne and Buck’s new home in Hawaii.

Roseanne met her current beau Johnny Argent through a writing competition she hosted through her website in 2003. They immediately fell for each other. In 2007 Roseanne bought a macadamia nut and livestock farm in Hawaii. 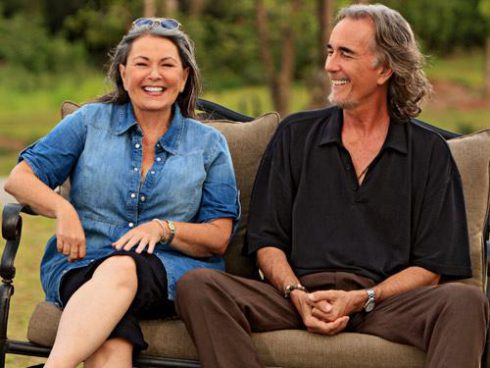 Roseanne and Johnny shared their life on this farm with the public via a 2011 Lifetime docuseries called Roseanne’s Nuts, a play on Roseanne’s openness about mental health struggles as well as her agricultural endeavors. While the 16-part series aired Roseanne attempted to run for president under The Green Party ticket, a pretty far-left political party. The bid failed and makes her current vocal support of Trump and right-wing views even more puzzling.

Although Roseanne and Johnny have never officially married, they are still together after fifteen years and seemingly going strong.

MAFS Myrla Feria and Gil Cuero’s fathers were both murdered