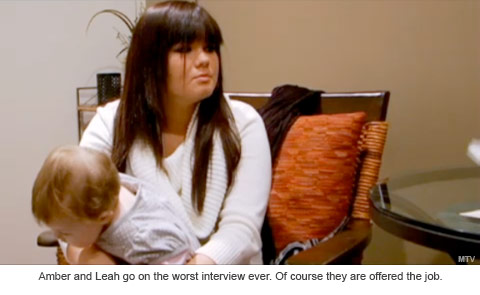 Amber and Gary continue to slowly, painfully go their separate ways in what seems like a poorly acted version of Who’s Afraid of Virginia Woolf. To make it slower and more painful, Amber takes Leah on the worst job interview ever. Maci continues to hope against hope Ryan will locate his initiative and personality. Farrah shops around for a new apartment in hopes of not getting into a domestic dispute that would result in her getting choked and her mother Debra Danielson getting arrested. (Spoiler – Farrah didn’t have any luck. See her mom’s mugshot HERE.) Catelynn and Tyler continue to provide stark contrast by being mature, this time with Tyler seriously considering joining the Air Force and proposing to Catelynn.

Farrah further foreshadows the unfortunate events that would eventually transpire with her mother with this bonus clip during which she vents to friend Alli about the “Hell” of living at home with her mom:

And here’s the cast talking about the issues that sprung up in Episode 7 in MTV’s “After Show,” including the seemingly strong relationship between Catelynn and Tyler:

.
.
.
Amber’s independence from Gary is addressed:

.
.
.
Mother/daughter relationships are talked about with a focus on Farrah.

.
.
.
The focus shifts to audience members Anna and Jelani who talk about how their friendship was affected by Anna’s pregnancy:

.
.
.
The teen moms wrap things up with a powerful message:

Tune in Wednesdays for new episodes of Teen Mom! Tune in every other day for Teen Mom news of all sorts!