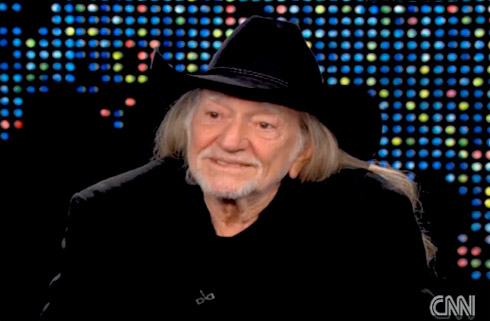 It seems like only last week Larry King was bouncing around in Snoop Dogg’s lemon yellow “sunshiningly-pimped-up” 1967 Pontiac Parisienne. But it wasn’t enough to have the second most adored pot smoker on the planet on his show, Larry King had to go out and get the top dogg himself, Willie Nelson!

Sadly I missed the entire episode, so I’m not sure what all these two magnificent dinosaurs talked about for an hour. My guess is that they discussed marriages gone bad and what it was like living in the wild west back in 1925. Cue The Highwayman…

I was a highwayman. Along the coach roads I did ride
With sword and pistol by my side
Many a young maid lost her baubles to my trade
Many a soldier shed his lifeblood on my blade
The bastards hung me in the spring of twenty-five
But I am still alive.

Oh man! I have no idea what baubles are, but I am certain there were a lot of them lost to Willie and Larry through the centuries! (CLICK HERE to find out more about at least 9 maidens who lost their baubles to Larry King.)

Ah, but enough jokes. Let’s listen to Larry King as he cleverly tricks Willie into admitting he’s high on the show. (A “trick” that could have been accomplished a lot sooner if Larry had started with, “Willie, are you high right now?”)

What’s up with Larry freaking out, pointing at Willie and screaming, “SO YOU .. HAVE POT IN YOU RIGHT NOW?!?” LOL! Willie seems almost frightened there for a minute!

Here are a couple more clips of Larry and Willie, including their duet of “Blue Skies:”

“Blue Skies” is a great song and Stardust is perhaps one of the top twenty country albums of all time (precisely because it almost isn’t a country album – oh and it’s nearly perfect), but we all know what song he should have done for Larry given his troubled history with the fairer sex:

I love you Willie!